Avatars are Nitrome related pictures that allow for the customization of a user's appearance on Nitrome.com. Most avatars are obtainable by finding pink wrapped gift boxes hidden within the site that correspond to a hint found on the user's avatar page.

With the announcement of Accounts, Nitrome planned on having an avatar based system. This system allows for the user of an account to use an image of a Nitrome character as their avatar, but does not allow them to use an image they created him/herself, likely because this type of user-generated content can be offensive, as was the case with Hot Air Balloon Maker custom balloons.

To get around this, pre-made avatars were created. The user of an account is given a set amount of avatars upon creating their account, and can get more by finding hidden presents around Nitrome's site, and in their games.

Pink presents with gold ribbons were hidden around Nitrome's site, and in their games. Players can obtain them by clicking on them or touching them with their game character. When a present is taken, a message saying "New avatar unlocked!" will appear at the top of the site's screen. The present will then appear in its spot on the user's avatar page. The user can then go to their avatar page and click on the present to open it, revealing the newly-unlocked avatar.

During April 14th-20th 2014, Nitrome had a special avatar event where one avatar would be hidden within the site daily. If the player unlocked the eggvatar, went to their avatar page, an easter egg-shaped present would be shown over the avatar unlocked. Once clicked, a cracking animation would be shown, uncovering the unlocked avatar by cracking away at the egg.

From May 7th 2014 (Icebreaker: A Viking Voyage), September 5th 2014 (8bit Doves), and January 14th 2015 (Gunbrick), Nitrome had a "New Avatars" advertisement for each respective mobile game in the profile module within the site.

During October 27th - 31st 2014, Nitrome had a special Halloween avatar event where one avatar would be hidden within the site daily.

The message (Easter) in the site

The message (Easter) in the game

A big easter present, which can be found in changeType()

A present on the avatars page, upon finding an avatar

An easter egg-shaped present on it, upon finding an Easter avatar 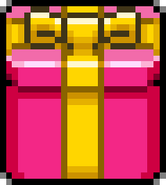 The present in the Avatars page when clicked

The frame shown when hovering over an avatar

The image shown over locked avatars 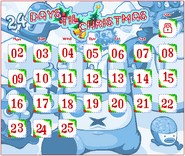 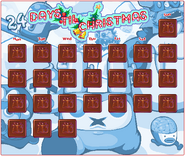 The Christmas 2013 calendar with unopened avatars 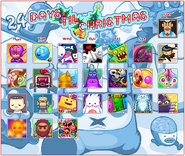 The Christmas 2013 calendar with opened avatars 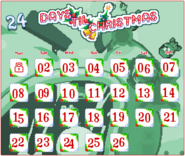 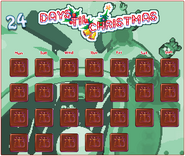 The Christmas 2014 calendar with unopened avatars 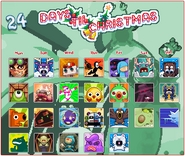 The Christmas 2014 calendar with opened avatars

A piece of chocolate with a present on it, upon finding a Christmas avatar 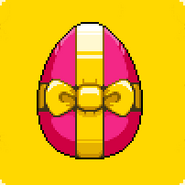 The Easter avatar falling from a parachute as seen in Mutiny.

The Easter avatar's animation while opening.

An avatar block in Steamlands 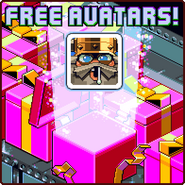 The Free Avatars advertisement for Icebreaker A Viking Voyage 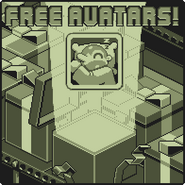 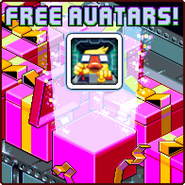 Following avatars are given when a user registers a Nitrome account.

Some avatars are given after the player has completed a certain task. If the avatar is not unlocked, then a hint will show on the locked avatar for the player to figure it out.

Nitrome first hinted at the Christmas Avatar event on November 22nd, referring to it as a "We have a few other top secret things ... the first one should be revealed on the 1st of December!" It was later mentioned again on November 29th when Nitrome made a blog post about the upcoming event, and released a blurry picture of it.[1] On December 30th, Nitrome released the Christmas Advent Calendar, along with a blog post about it.[2]

The Christmas Avatar Calendar is a virtual Advent Calendar that allows players to hunt for a new avatar that is released each day. The calendar (like all advent calendars) went from the first of December to the 25th (Christmas), and on each of those days a new avatar and clue would be released. Each square on the avatar calendar had the number of the day on it. Once the day came, the square would change to an image of a lock, and hovering the mouse over the image would show the hint to finding the avatar. Once the avatar was found and obtained, the locked square changes to a chocolate with a present on it. Clicking on this chocolate will cause an animation to play of it being eaten away, revealing the avatar.

After the first week of the calendar took place, Nitrome created a blog post about how pleased they were the outcome of the event so far[3].

Hover over a day to see its hint; click the day to jump to the specific heading. 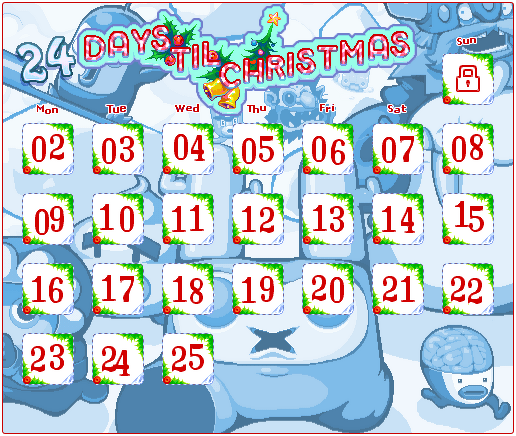 From December 1st-26th 2014, Nitrome released an avatar every day.

Hover over a day to see its hint; click the day to jump to the specific heading. 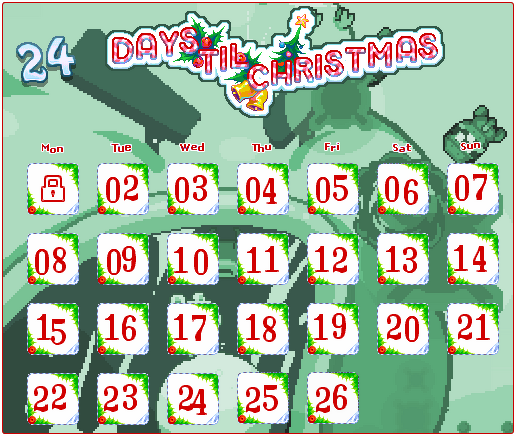 Similar to the Christmas 2013 event, from Monday April 14th to until Sunday April 20th, Nitrome was to release an avatar on each day. These avatars were either be hidden in a game or somewhere on the site. A total of 7 avatars was released.

Similar to the Christmas 2013 and Easter 2014 events, from Monday October 27 until Friday October 31st, Nitrome will release a new avatar on each day. These avatars will either be hidden in a game or somewhere on the site. A total of 5 avatars will be released.

When the updates came a link was added in the game which allowed the player to log into their Nitrome account and unlock the eight avatars. These avatars will only be able to be unlocked through this method, people without the game will not be able to unlock the avatars.

When 8bit Doves was released a link on the game's menu allowed the player to log into their Nitrome account and unlock four 8bit Doves exclusive avatars. These avatars will only be able to be unlocked through this method, people without the game are unable to unlock the avatars.

When Gunbrick was released a link on the game's menu allowed the player to log into their Nitrome account and unlock the eight Gunbrick exclusive avatars. These avatars will only be able to be unlocked through this method, people without the game are unable to unlock the avatars.

These avatars have currently not been released and are completely unobtainable as usable avatars. The only proof the avatars exist is that they have been uploaded to Nitrome.com, and as such, are only viewable only when the avatar's image URL is gone to.

An avatar of Blue enzyme from the Test Subject series [1]

Avatars in this section were uploaded to Nitrome.com with the intent of being used, but at a certain point, Nitrome decided not to use them.

This avatar was uploaded on July 12th 2013 with the first batch of avatars, and was also present in an image advertising accounts. It was never made accessible as a usable avatar, however, as two other avatars uploaded at the same time and not used yet, it was assumed these avatars would eventually be used.

On December 1st 2013, Nitrome stated that this Cuboy avatar would never be used as it was decided that Cuboy would represent Nitrome.[4]

The avatar with Cuboy among clouds. URL: [2]

The image with the Cuboy avatar. URL: [3]

Reverting back to no avatar

When changing an avatar, the user of the account clicks a URL to change their avatar to another one, this URL being http://www.nitrome.com/profile/avatar/index.php?a_id= , with after the "=" sign being a two digit number. If a one digit number is entered, the user will be able to see their comments.

Placing after this equal sign in the address any letters, symbols, the numbers one, three, eight, thirteen, or any number not already assigned to an avatar, then going to this URL twice, will cause the player's profile avatar to become completely white, their avatar when looking at their profile page to be the avatar that they get when they have just created their account, and all the comments they have made on the comment sections of game pages, these comment will disappear.

If the number will be assigned to an avatar in the future and the player has this avatar set, then the player will have the avatar automatically as current avatar without the player having to unlock it, although the player can still unlock it the right way though. Going back to a regular avatar will cause their comments to reappear.

Sometimes, when an avatar is obtained, it will give the player a message that they are not logged in (even though they are), and the present will not disappear. However, if the level or game is reset/refreshed, the gift will not be seen, and the player will have the avatar.

Upon the release of the 2014 Christmas calendar, page 2 contained multiple locks with the hint being "need to be", some of them even including hints for other days on the calendar, though the avatars for these days could not be obtained until the day came.

Another glitch happened on New Year's day 2014, where the Christmas calendar reset even though it should have disappeared.

During the release of Submolok before the Christmas Calendar was released, two Christmas avatars appeared on the map, but invisible during gameplay. If the player touches the avatar's place, which is marked on map, a message would appear saying "Seems to be a problem with server".

When the Christmas 2014 avatars were released, when one was unlocked it could also be found on page 3 of the user's avatar. Sometimes when getting a Christmas 2014 avatar, on the advent calendar page clicking to unlock the avatar would do nothing, but hovering over it would yield the description of the avatar. However, on page 3, the correct avatar appears but lacking a description. 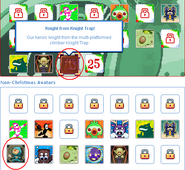 The glitched calendar avatar and the unlocked avatar on page 3

The avatar not selected

The avatar not selected

The Bricks skin avatar gift that cannot be clicked