Bad Ice Cream 2 is an action winter game released on December 21, 2012. The player controls an ice cream character as they try to collect fruit. This game was made a distributable game on March 22nd, 2013, and it was ported to HTML5 on May 27, 2020, being the second Nitrome game ported to said engine.

This is the only level where a green squid appears.

As in the previous game, the player has to collect all the fruit in a level in order to progress to the next. Bad Ice Cream 2 introduces new fruit: coconuts, peppers, and blueberries.

Bad Ice-Cream 2 was made Nitrome Touchy compatible on January 8, 2012. Touchy support allows up to four players to play simultaneously on one screen.

The screen displays a D-pad with the skin decorated to match the player's chosen character. Players move their ice cream scoop around the arena using the four directional keys. The right-hand buttons can be pressed to break and create ice.

If a name like "nobodynsis" is selected as the player name, when they submit their score, the player's name will be blanked out.Nitrome later fixed this glitch on the third of January.

When the player collects all the apples, and when all the peppers spawn, eventually the game will freeze. Unusually, the game's screen only freezes - the player can reset the level via clicking the gear at the top-right corner of the screen.

This glitch may be due to the amount of objects on the screen - an enormous amount of peppers melting ice blocks, the player, and the eight enemies in the level may have been too much for the game to handle, so the game has to slow down to handle everything.

Nitrome eventually revealed that the glitch was caused by an unstable lolipop in the level. Due to it being unstable, enemies and fruit could escape out of the level and slow down the game. Nitrome later fixed this glitch on the third of January.

Sometimes, when an ice cream character dies, its melted remains may be under the ground partly.

Nitrome revealed Bad Ice Cream 2 on this day, and also announced that the green ice cream's flavour is "mint choc[olate]-chip". 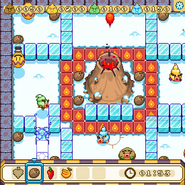 Nitrome releases the game. They also add that the game had many bugs, and that they had sorted out most of them. Nitrome was left with either releasing the game on the 21st or leaving it to be released after the New Year.

Nitrome's first day in the office fixed many bugs in the game, including: