Nitrome Wiki
Register
Don't have an account?
Sign In
Advertisement
in: Articles with incomplete sections, Beneath The Lighthouse, Browser games,
and 14 more

Serene puzzle action game about a boy in search of his lost Grandpa.

Beneath The Lighthouse is a puzzle action game released on October 29th, 2015 on iOS on the Apple App Store, on Android on the Google Play store, and on browser on January 28th 2016. The game was released for Apple TV on the Apple TV store on October 30th, 2015, but only as a premium game. An Amazon App Store release is planned[1]to follow soon after the game's mobile release[2].

The player plays as a young boy searching for his lost Grandpa.

In each level of Beneath The Lighthouse the player has to maneuver the circular room in which the boy is contained in. The boy is not directly controlled, rather it is the positioning of the room that allows him to maneuver. The room's orientation can also affect certain hazards and obstacles. Rooms are connected to each other via green pipes, which signal a checkpoint. A level consists of about three rooms and ends when the boy reaches the door.

The boy will die on contact with any hazards, and respawns at the start of the current room if the player has remaining lives. If all lives are depleted, the level has to be started from the beginning of the set. Players are given three base lives, but can replenish some from certain areas within some levels. This lives system has currently been removed from the Google Play version of the game and will be removed from the Apple App Store version[3].

If the player dies ten times on the same level, a "Skip" option will be shown and the player will be able to skip the level by watching an advertisement video. However, no trophies will be received for the skipped level if this is done. The skip option is currently only available in the Google Play version of the game and will be added to the Apple App Store version[3].

This update was released on October 29th, 2015, and fixes a few bugs. Another respawn glitch was fixed, a glitch that caused all levels in the game to be unlocked was fixed, and a bug that caused level 11 to crash was fixed. It is labelled version 1.0.3.

Released on October 30th, 2015, and labelled Version 1.1, this version reduces the game's file size of 94 megabytes down to 43.7 megabytes and mitigates the chance of a respawn bug happening.

Released on November 5th, 2015 on Google Play and November 7th, 2015 on the Apple App Store, this updates fixed several bugs and polished some other aspects of the game. The update is labelled Version 1.0.4 on Google Play and Version 1.1.2 on the Apple App Store. This update fixed a freezing bug at the start of the game[4], optimized level 14 so it runs better on older devices[4], fixed a glitch regarding the debris of crumble blocks[4] and another glitch regarding detecting boxes, and players are no longer forced to watch the introduction[4] and the skip button in it have been fixed[4].

Certain areas of the game were also polished, such as lanterns no longer swinging irregularly in places[4] and a small loading image appearing when a level was being loaded.

Released on November 5th, 2015, this update fixes a glitch with background sounds still playing even when they were disabled and also introduces sound improvements to the game. Previously, the game had only mono sound instead of stereo due to Nitrome having to compress the game's sound so the game's file size did not exceed Google Play's file size restriction, but with this update volume is balanced for all sound throughout the game[4].

This update was released on November 23rd, 2015, on Google Play and on January 4th, 2016, on the Apple App Store and is labelled Version 1.1.3 on that store. This update fixed a glitch with the Midas touch and all trophies achievements not being awarded even when the requirements are filled.

This update was released on December 3rd, 2015, and is labelled version 1.0.9. This update's update notes stated that this update improves user experience with Google Play game services.

This update was released on January 7th, 2016, for Google Play and April 29th, 2016 on the Apple App Store. This update removed the lives system, allows players to skip a level by watching a video advertisement if they fail the level enough times, disables Cross Promotion advertisements when Premium Unlock is purchased, and adds four new achievements.

Because the lives system was removed, the game's game over screen was also removed and the button on the main menu to buy the Premium Unlock in-app purchase was changed so that it no longer has an icon for infinite lives. 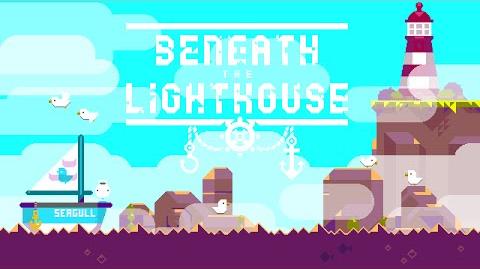 Another GIF of Beneath The Lighthouse's gameplay, posted on September 4th, 2015

A GIF of sponges from Beneath The Lighthouse, posted on September 5th, 2015 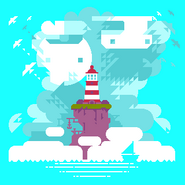 The promotional art of Beneath the Lighthouse, posted on October 2nd, 2015

The GIF showing the auto-winch hazard, released on October 27th, 2015

Beneath The Lighthouse was first indirectly mentioned on July 1st, 2015, when Nitrome mentioned that they would use the Ditto art style again and that the product of this may occur in the near future[5]. The game was again alluded to on July 24, 2015, in a Friday update post where Nitrome said that they would be revealing a new game the following week and it would be the next game to come out[6]. Beneath The Lighthouse was announced on July 31st, 2015, with a teaser trailer for the game also posted[1].

The Google Play version of Beneath The Lighthouse was updated on January 7th, 2016, with the balancing update, which removed the lives system from the game, among other changes. Nitrome explained that this update would be coming to the Apple App Store version as well and that they were removing the lives system because most players were not progressing to the game's later levels, which Nitrome saw as unfortunate considering the work that was put into the game[3]. Although this meant the loss of revenue gained through players buying the Premium Unlock to remove the lives system, this system was not a significant part of the game's revenue and Nitrome thought that this loss would be offset by more of the regular ads being shown[3]. The update was later released on the Apple App Store on April 29th, 2016.

The beginning of development for Beneath The Lighthouse's game mechanic was inspired by Roly Poly[10].

On mobile, Beneath The Lighthouse's initial released ended up having a very large file size due to the game's high resolution and large sprites[13], cutscenes, and Unity (the program used for developing the game) taking a long time to compile the game[14][15].

Because Nitrome wanted all versions of Beneath The Lighthouse to be released around the same time, the release date of the Apple App Store and Google Play version of the game was delayed and made October 29th, 2015, so that the game's release would be near the game's Apple TV release date[16].

The game was featured on the front page of the Games section of the Apple App Store on October 29th, 2015, the same day the game was released[18].

Nitrome tweeted on November 7th, 2015, that on the Apple App Store Beneath The Lighthouse had been featured in the "Best games of October" and "More games we love" section[19].

On the Google Play store, the distributor of the Android version of Beneath The Lighthouse, the game was awarded the Editors' Choice award. This event occurred during the time period of February 12th, 2016, to March 9th, 2016[20].

Prior to the balancing update, the game used to have a lives system that would give the player three hearts to complete the whole level, with a heart lost every time the player died and the player having to start the level from the beginning if all three hearts were lost.

The game also had heart pick-ups that appeared in some levels, these pick-ups appearing as dark red hearts that would refill one of the player's lost hearts if one had been lost, and would do nothing if the player's heart supply was full. This heart appeared on several levels, on of them being level 19.

Because the lives system was removed, the game's game over screen was also removed. This screen appeared whenever the player depleted all of his/her lives, and allowed for the player to buy Premium Unlock, watch a video advertisement for three more hearts, share the game for three more hearts, restart the level, or go back to the level select menu.

The removed game over screen