The blog is where information about Nitrome.com is posted on their site. It includes a New!, a Works, a Preview, a News! a Fans, an Updates, a preview, a Vote, an iTrome, a Distribution, a Industry News!, a Memory Lane, and a Pixel Love banner section. On August 5, 2009 a Vote section was added. The entire blog was updated on February 25th 2011, dropping some old features while adding new ones. Two new banners were added with Nitrome 2.0: the Industry News banner, revealed on January 12th 2012, and the Memory Lane banner.

Before the blog, a similar update information was used on Nitrome's first site. This blog was called "news" (sometimes referred to as Nitrome News), and it would be updated every time something interesting happened at Nitrome. This usually happened about 1-2 times a month.

The official Nitrome blog was launched on May 20, 2008[1], the first game to have a blog post being Knuckleheads. Borders for the blog would change depending on the Skins used.

It suffered some neglect during August to September in 2010, but was eventually began being updated again with current content. Later, on February 25th 2011, about two years later, Nitrome updated the blog, adding new features to it. This time the blog was being done by Tom.

When Nitrome post information on their blog, they use a banner for what type of news it is. Below is the banner used and the information covered with the banner. This is a feature that was introduced with the commencement of the new nitrome blog. However, blog posts created before its introduction were also allocated the appropriate banners.

The banner is an image of a caveman in a mechanical machine, while other cavemen are making stone wheels.

The Fans Banner is a banner used when a posting fan related content. It is used now and then, as fan content is rarely published.

The Fans banner shows several mail storks coming to deliver mail, while several other brown birds dig through all the dumped mail on the ground.

The News Banner is used for Nitrome blog posts about Nitrome on other sites. The news for this could range from an interview with Nitrome on a site, to Nitrome winning an award.

The Works banner is used when a post regarding maintenance on the site or game is used. This appears very rarely on the Nitrome blog.

The banner for Works is of penguin-like creatures in suits on a road doing maintenance on it with big machines and pylons.

The Updates banner is basically the Works banner with "Updates" instead of "Works".

The Preview Banner is used when Nitrome reveals a preview for a game. It has only been used for this purpose and has since been more frequently used.

The banner is of a fortune-teller reading her crystal ball, which reveals Hot Air in it. Glass bottles with creatures in them - one including a sporty - are seen in the background.

The Vote Banner is used for posts that have a poll in them. In Vote posts, the poll is a box and has multiple options, with the topic being above the box. Unlike other polls, the player can vote multiple times, but only their first vote will be counted.

The banner for Vote is of various primates going to drop their vote in a box.

This banner was used when Nitrome content for the iPhone was posted. The image of the banner is of an iPhone with a face rocketing away from metal hands trying to poke its screen.

The Mobile banner is the iTrome banner with "Mobile" instead of "iTrome".

A banner used for posts about Distributable Games.

This banner is used for posts about content that could help of potentially affect Nitrome. It is a variation of the News Banner.

This banner is a spoof of the previous News banner. In the middle is a big yellow construction sign with the words "Industry" and "News!" on it. On either side of the sign it shows the same man and robot with microphones in front of them, but this time the man is wearing a yellow hard-hat, black goggles, and a white shirt with overalls. His face and clothes are dirty. The robot is wearing the same brown suit as the man was last time, as well as a brown reporter hat with a slip of paper sticking out of it.

A banner found on Nitrome's site on January 15th. The banner is used for posts for reminiscing about past Nitrome games.

The banner has the word "Memory" in a daytime scene and "Lane" in a nighttime scene. The Daytime scene shows a bunny (somewhat resembling Fluffykins) joyfully walking down a road eating a carrot. The hills and sun in the background are all smiling, and there are rows of carrots covering the hills. The nighttime scene shows that the same bunny featured in the day-time side is now (now holding alcohol and with a hangover) reminiscing his happy life (revealing the sunny side to just be his memory). The Dog is peeing near the drunk bunny.

When Nitrome features a game outside of Nitrome, they use this section, with a link to the game's page hosted within their own domain. They feature a new game each Monday.

For a full list of Pixel Love games, see List of games by feature on Nitrome Pixel Love Wiki.

The letters are shown in a pixelated style. On the left of the banner is a heart with a bow and arrow, firing at unhappy blobs on the right side. The blobs that were hit are now happy. The green hills in the background have smiling expressions, that when moving from the left to right begin to turn into frowns with tears.

The letters are shown more pixelated and appear to use stylized pixels. The letters "Pixel Love" appear.

The Questions Banner is a banner about Nitrome seeing if any fans have questions they would like to ask Nitrome.

In the center underneath Questions? is a small frowning blob. surrounding the blob are dentures, saying "Blah".

The Wiki Banner is a banner used when the blog post is written by a Nitrome Wiki member.

The banner shows a lot of men with Cuboy masks and a woman with a Cuboy mask. The word "WIKI" is coloured yellow.

The only two unused banners on Nitrome.com seem to date back to 2007/2008 and seem to be done by Simon Hunter. These banners can be found via a .swf decompiler, or by typing in the banner's exact URL. Unusually, these banners were not removed at all, even when Nitrome switched to Nitrome.com 2.0.

This banner is one of two unused Nitrome banners. It is uncertain what this banner would have been used for, or if it was superseded by another banner. It could be under a section for showing how Nitrome produces their games. Judging from the art style, this banner was done back in 2007/2008, probably by Simon Hunter.

This banner is one of two unused Nitrome banners. It is uncertain what this banner would have been used for, or if it was superseded by another banner. Judging from the art style, this banner was done back in 2007/2008, probably by Simon Hunter.

Each post has a category under based on an object in the banner. The category has the same name as the banner used. When the category is clicked, it will pull up all the posts with the same banner. They are not present in the new blog, but an image of the category appears next to the title of each post.

The old blog can be navigated quite easily. A scroll bar on the right side of the blog box allows for vertical movement (up and down movement) of the previous blog posts. Each post has a banner and a category with the name of the banner.

The new blog has several new features added, along with retaining many old ones. The outside borders of the blog are the same, while the inside Borders are smaller. Things that are no longer available, but were available in the previous blog. The first, and only, being categories, which were probably removed to due infrequent usage.

The baby and old man buttons were added to a bar at the bottom of the blog Box that moves when the player moves and can be easily accessed by just clicking them, without having to scroll all the way down. The blog can also be easily scrolled by clicking and dragging vertically, by clicking the up and down buttons on the bottom blog bar, using the up and down arrow keys, and for the first time, can be scrolled with a mouse wheel.

On the title bar on each post, a little arrow is present at the end of the bar. Clicking it will hide the post. At the top right of the blog box is a '?' box, clicking it will display short animations of how to use the new blog.

The new blog does not use Flash; instead, JavaScript was used. The new blog was made by Nitrome's web developer Tom McQuillan. [citation needed]

Every Friday, Nitrome posts an update. It sometimes has content about next week, like whether there will be a new preview or game. At the end, it wishes the reader a happy weekend.

After a long break, Nitrome brought back Friday updates, the first one posted on June 24th, 2015.

Rarely, usually due to a statutory holiday, Nitrome will make an early update. In the past, this was done once on Monday, twice on Wednesday, and four times on Thursday. 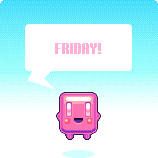 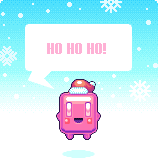 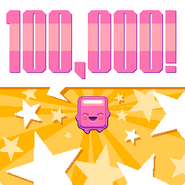 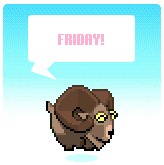 A Friday update image with a goat from Icebreaker: A Viking Voyage 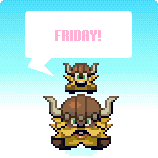 A Friday update image with Vikings from Icebreaker: A Viking Voyage 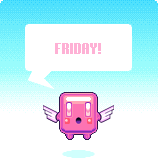 A Friday update image with Cuboy with wings, for the release of Nitrome Touchy 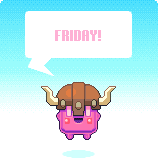 A Friday update image with Cuboy dressed as a Viking from Icebreaker: A Viking Voyage 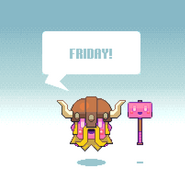 A Friday update with Cuboy dressed as a viking, right beside a cuboy hammer, for the release of Icebreaker: A Viking Voyage on Android 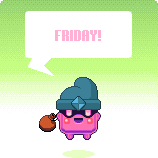 A Friday update image with Cuboy dressed as a Flightless duck 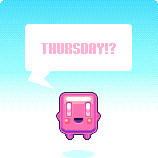 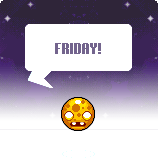 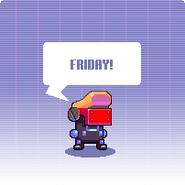 A Friday update image with the protagonist from changeType() 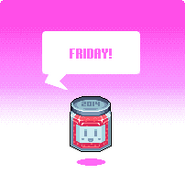 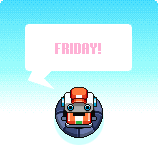 A Friday update with the robot from Bump Battle Royale 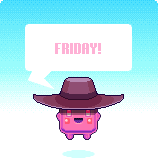 Nitrome has tested the new blog in various browsers, and said that there "may be some compatibility issues with the blog on other Browsers". They say that the only problem they found is that in Internet Explorer 6, the Shrink function does not work and round corners will not appear around the content.

The keep button, when clicked, will bring up a box with a humorous quote. Below is a list of them.

On December 4, 2013, Nitrome released an avatar challenge with the hint "I guess we will just "Keep" this on the blog.".

There was a glitch in the old Nitrome blog. If the bar on a blog post which says the name of the post and the date it was posted is right clicked, and "Play" is clicked in the drop down box, the borders of the blog will change color.

It is not known what causes this glitch, but it is the second non-in-game glitch. (the first being the Highscores Glitch). It has since been fixed with the change to the newer blog.