For the weapon, see Gun (Nitrome Must Die)#Canary.

Explore the mines using your laser cannon to carve through the rocks.

Shoot Em' Up, Platformer, Side Scrolling

Canary is a side-scrolling shooter game released on February 2nd, 2011 for Miniclip. The player takes control of Canary 214-LE as he ventures through a asteroid based mining colony. This game was made a distributable game on April 4th, 2012. 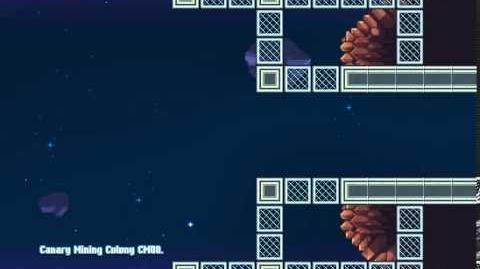 The player encounters two slabs of rock blocking the way and destroys them. The player must then push several carts out of the way and make another cut in a piece of rock.

Then the player needs to make two cuts in a piece of rock and push the piece out of the way to progress to the next area. The player must next cut three pieces of rock, using the third to knock down more carts. The player must avoid falling debris, and progress past more mine carts to the end of the level.

The player will navigate above a pile made of several slabs of rock, which the Canary Miner attributes to a rock slide. The player must cut a way into the rock. The next passageway will contain several strands of alien spores and a few alien squids. The player will make two parallel cuts, push the rock on the mini squids, and make two more parallel cuts.

The next area has crushers in a passageway full of alien spores and mini squids. The player progresses from there to an area with snail gun monsters, where a slab of rock needs to be cut to crush it. The player must do the same thing again. Then, cut two parallel lines, where alien spores will pull the loose rock to the right, killing enemies. Progress to the ending platform to finish the level.

The player starts the level in a wide cavern full of alien spinners, alien bats, alien liquid droppers, and alien birds. Near the exit is an alien bulb. Underneath that are a set of mines that the player must use a chunk of rock to destroy. The player must push another piece of rock to get to the next area.

The player now is in another cavern full of alien spinners, alien bats, alien snail gun monsters, and alien birds. The exit is at the right of the cavern.

The player starts in a cavern with three alien bees and two alien bulbs. The cavern splits into two sections, each with another alien bee and an alien spore. The cavern rejoins into one, with many alien bees in groups of two. The player must use the slabs of rock hanging from the ceiling to crush them or the ones on the floor to avoid running into them or the gas they release.

The cavern will end and a new one will begin, with two large holes full of Alien Bees. The player must push two sets of mines down to crush them, then go down the second hole, being careful to avoid the gas, and the ending platform will be at the right.

At the beginning of the level, there will be two crushers pushing together. The next segment is composed of electric alien rods inside a passageway with electrical walls. After that, there are more crushers with Alien Spinners in between each crusher, which can easily hit the player. Next, there is a long passage with electrical walls.

The next area has more electric alien rods with blocks of metal that block their rays when the rays are hitting the metal. When there is empty space between the alien rod and the player, the beam will hit the player. There is an automatic spinning metal wheel, then another electrical passage with alien spinners in the middle and at the end. There is a rock corridor, and the exit is to the right.

There is an alien spore, along with alien spinners, in the first segment of Level 6. Next there are two electrical blocks. However, it is impossible to get in between them without damage, and on their top and bottom are four alien spinners each. Next, there are three more electrical squares, which the player has to go under or over without hitting.

This level is almost completely composed of alien bees and metal wheels. Avoid the mess of automatic moving metal wheels, and the alien bees, and progress to the right. Tip the odd alien wheel from horizontal to vertical, and shoot it in the head to kill it. Next, do this with the one on the top or the one below. After that, a manually operated metal wheel will be in the next area, where the player has to use Canary 214-LE's laser to turn it.

Cut a piece of rock to get to get to the next area with automatic metal wheels. Push the mines in each wheel. When you are out of that area, kill the alien bats to go on to the finish.

The beginning of the level has two occasions where the player has to push a mine cart to plug up the holes with rays from electric alien rods coming out. Then the player will go to the upper right and use Canary 214-LE's laser to push the mine cart inside the purple gas to the right.

Then, the player should fly above the purple gas, and enter the thin passageway with lots of mini squids. Push the cart in front of them and go to the next enclosure. The player will then have to push two mine crafts into a manually operated metal wheel, and if it isn't spinning enough, use the laser to push it forward. Push the gravity orb, then cut two or three parallel lines in the rock and push forward.

Use the rock debris to protect you from those crushers, then push some more mine crafts to plug up the holes with the electric alien rods above. Cut a slice of rock to block a little bigger hole, then press another gravity orb. The next part involves you avoiding the crushers, and when the top one retracts, zoom to the upper right to go to the next crusher area, exactly like the first.

To exit this one, cut two lines in the rock and push again. The next part has the player moving to the open areas where the crushers don't hit, then going above to the next open area, until the player reaches the top, and the end.

The beginning of this level has several alien rods, moving to the left. There is a clear area going near to the rods, right before three alien rods moving between the rocks. The last part is similar to the first clear area of the level, but the difference is that the alien rods are near each other. The next part is the player passing to a rock with several missiles moving to the left. The next part is a pit where the rock will fall.

The concept of having canaries and miners both be related in the game is partly inspired by real-life Miner Canaries. Canary birds would be brought down into mineshafts as a means of detecting hazardous gases. The birds have a tendency to sing, so if they ever encountered a gas, they would stop before finally succumbing to it. Miners, upon noticing the bird's silence, would evacuate from the area. Nitrome confirmed this in a Facebook comment on the Canary Facebook post.[1]

It also seems to draw inspiration from the Dead Space series, since it takes place in a space mining colony that is overrun by aliens that can infect people. Also, the protagonist's main weapon is a mining laser used to cut the aliens apart.

A teaser of the game was launched on the Blog, showing a screenshot of one of the levels. The game finally came out on February 2nd.