Climb and swing your way through the levels, avoiding the crazy monsters!

Canopy is a platforming-action game released on August 19, 2011. In the game, the player controls what is presumed to be a monkey and has to move across branches and try to get to the goal of the level. The game is the first to have a fan suggested name.

Mouse - Click poles to hold on to them, and hold down and shake to shake branches

There are twenty levels in Canopy.

The level starts of with a tutorial on how to play the game, and then continues on to introduce the player to the brown branches, and the help tags. After the player grabs there way to the 2nd tree, the player will be introduced to the 25 points berries.

String and spiders are both introduced on this level.

This level starts just by going from tree to tree by shaking. The plus and minus nodes get introduced.

This level is on green slippery vines and introduces rocket nodes.

This level is based around wind.

This level is on mushrooms and some of them have beetles.

This level is on strings that have squishy bugs, have purple gears and in the final of the level have spinning red vines.

This level is a windy level and introduces carnivorous moths. This level only have two places that do not have the moths: the first tree and the third tree.

This level have various "sections" that are separated by trees and in this trees have several beetles and one big purple fruit. The first "section" have three spinning red vines, they are slow and they center is on the first or in the third metal bar. The second have four spinning red vines, they are faster and its center is in the second metal bar.

The third have two large spinning red vines, they are slower, its center is on the first and third metal bar and both spin in the clockwise direction. The fourth is the same as the third, but spin in counter clockwise direction. The fifth, and final "section", have three spinning square shapes made by red vines and they don't have one side (which allows Canopy pass).

This level have many nines and some of them have squishy bugs.

This level is full of bomb fruits which explode and grow back. The player has to navigate the level avoiding the Fruit.

This level is filled with slippery blue vines hanging by string, and encountered throughout the level are squishy bugs, the only enemy encountered. Like some levels, they have a hint which reads the area where the character is in.

The hint reads: "Oh, somebody has left a note.... Dear visitor , WELCOME TO THE MAJESTIC HANGING GARDENS! We have had 360 degree views around our geometric shaped booths. Please respect the garden, vandals will be prosecuted."

This level have trees with some red vines with a shape of flowers and carnivorous moths on them.

This level has lots spinning branches and red vines, that the player has to avoid.

In this level all the slippery vines are bent to make it like the player is in a house. The player has to pass things like a pair of shoes, a cat and a fireplace made out of slippery vines, and the player even go upstairs and out of the window. Most of this level is high up, so if the player falls, they will most likely die.

This level is a rotating maze with red vines and red vine logs. The player has to navigate certain areas by timing when they get on a string of webbing, which will be inside red vines part of the time.

This level has lots of carnivorous moths following the player as they move along the vine. The player must also avoid the red vines.

This game was first hinted in a blog post July 29, 2011. Nitrome revealed two large screenshots of the game. According to the post, they were not ready to reveal information on how the game worked yet, but they fans to guess the controls.

Nitrome released a 49-second trailer for the game, also inviting fans to suggest a name for the game on Nitrome's Facebook and Twitter page.

In Nitrome's weekly Friday update, posted at the end of the week, Nitrome announced that they have chosen the name for the game. Nitrome named the game 'Canopy', the name suggested by Jazzy from Facebook. 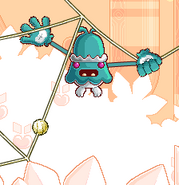 The big game icon for Canopy.
Add a photo to this gallery

Found in the code of the game is a a .gif of a bubble, and a .gif for green electricity. Strangely, these two .gifs exist in the coding for the game Chisel 2 as well.

The electricity
Add a photo to this gallery

Retrieved from "https://nitrome.fandom.com/wiki/Canopy?oldid=203976"
Community content is available under CC-BY-SA unless otherwise noted.