Escape the caves in our second installment of the Cave Chaos series!

Cave Chaos 2 is an action-platformer and the second in the Cave Chaos series, released on May 17, 2012. It retains the same gameplay as the predecessor Cave Chaos, where players control miners trying to escape a cave before it collapses.

There are fifteen levels in Cave Chaos 2, five less than the first Cave Chaos.

The game starts with a cutscene showing the brown miner sleeping against some barrels. A puffing monster hops toward the miner, this waking him up. The brown miner approaches the monster, looking confused. Then, the puffing monster puffs out, sending the miner back, knocking over the barrels and sending him down into a cave. 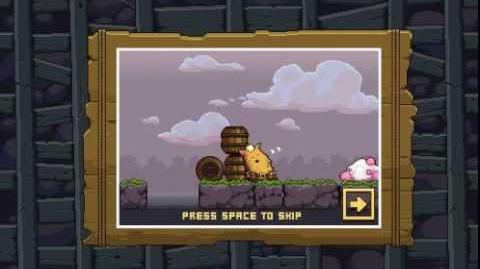 In Cave Chaos 2, all new enemies were introduced (except for two, who were Pushy and Dyna - Mo).

The game was first hinted in a pixelled image on Nitrome's February 15 blog post. Nitromians were encouraged to guess what the mystery sequel would be.

A week and two days after the pixelly preview image release, Nitrome revealed Cave Chaos 2 as the game hinted in the image. Along with this, a full preview image of the game was revealed, displaying the sequel's polished up graphics and a new enemy unfamiliar to the first Cave Chaos.

On Thursday, April 14, Nitrome made another blog post, this time revealing an image of the miner against the silhouette of the Under-Dweller, the final boss of the game.

Most aspects of Cave Chaos 2 were the same as its predecessor, although there were some obvious changes distinguishing it from the first Cave Chaos.

The "Run!" sign in Cave Chaos 2.
Add a photo to this gallery

Markus Heinel's website has on the Cave Chaos 2 page of his portfolio is an unused additional ending image[1] that shows the brown miner inside the Under-Dweller's mouth [2].

The image
Add a photo to this gallery

Retrieved from "https://nitrome.fandom.com/wiki/Cave_Chaos_2?oldid=208958"
Community content is available under CC-BY-SA unless otherwise noted.