Bounce your way through the S.S Squeakstar and help save our solar system!

Cheese Dreams New Moon is Nitrome's second return to the Cheese Dreams series, after an attempt some year prior at making a direct sequel to the original game[2], which was ultimately cancelled. The game was planned to be released in two parts. While the first part was successfully released on December 5th 2013, the second part, which was supposed to be released in 2014[3], missed its release date and its release is uncertain.

Much of the gameplay is the same as its predecessor. The player can complete special side tasks along the way, such as saving trapped planet-like characters on the mouse ship. Each planet has its own behaviour, which can be used to help it escape.

The player first starts off in a room with padlocked blocks and a key switch. By hitting the key switch the padlocked blocks will disappear allowing the player to go further. To complete the level the player needs to go right, jump on top of two spinning platforms to avoid spikes (which can be accessed right after jumping over the large purple block), reach the highest platform above, and go through the door. Then the player needs to go upwards to reach the topmost moving platform, ride this platform over a spiked gap, get off the platform once it changes direction, descend downward, and enter the door near the bottom of the level on the left.

To unlock level 6, the player needs a total of 600 stars. The player has to rescue Mars and guide him to the exit.

To unlock level 7, the player needs a total of 750 stars. The player has to rescue Saturn and guide him to the exit.

To unlock level 8, the player needs a total of 900 stars. The player has to rescue the lost moons and guide them to the exit.

To unlock level 9, the player needs a total of 1050 stars. The player has to rescue Mercury and guide him to the exit.

To unlock level 10, the player needs a total of 1200 stars. The player has to rescue the Sun and guide him to the exit.

In levels 6 to 10, the player can rescue various planets. Upon rescuing a planet, an avatar will be rewarded to the player, and the level icon will change to that planet's avatar image.

The Sun level icon
Add a photo to this gallery

A few years prior to work on Cheese Dreams New Moon, Nitrome worked on a a direct sequel to Cheese Dreams that expanded the story, this game taking place after the events of the regular Cheese Dreams. Although this sequel was ultimately cancelled, Nitrome later picked up the Cheese Dreams series again to create a remake.

In late March 2012, Nitrome released a demo of Cheese Dreams New Moon, this demo containing an example of the game's new physics engine[4] and the game's graphics. Development of the game presumably continued, however, other Nitrome projects caused the game to go on hold, while other projects prevented work on the gamer continuing.

Prior to the release of the first part, Nitrome staff for various parts of the game were caused to work on other games, such as in May 2013 John Kennedy (Cheese Dream New Moon's programmer) working on the programming of Test Subject Complete, and Jon Annal (one of the game's artists) working on the art of Icebreaker: A Viking Voyage. Work on the game was continued since September 24th 2013, and may have been the cause of the lack of Nitrome blog posts in the then-previous week.

On March 23rd 2012, Nitrome hinted in their blog that they would release a demo sometime during the next week, although they didn't tell what game it would be for.

On March 30th 2012, Nitrome released a demo for the game, the Cheese Dreams Demo. It took the player around a small level, and allowed the player to try and collect 450 stars hidden around the level. The level introduced many of the components that would appear in the full game.

On September 24 2013, Nitrome announced the title of the game, Cheese Dreams: New Moon. They also announced that the game would be a remake of the original Cheese Dreams, with the same plot. The only difference would be the game engine and mechanics. Nitrome also released a preview image for the game. 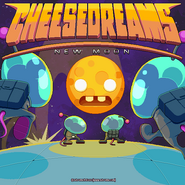 The preview image
Add a photo to this gallery

On November 15 2013, Nitrome released a teaser video for the game. The menu for the game was also shown in the video. 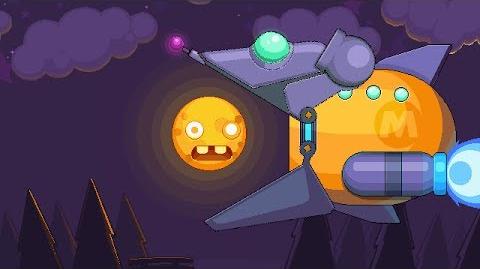 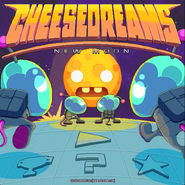 The game's menu, revealed in the video
Add a photo to this gallery

On December 10, Nitrome updated the game to version 2.0. In the update, several bugs were fixed, including avatar bugs and the star count replay bug. Levels that were slow were also optimized, a fall off the screen death sound was added, and the Nitrome Touchy full screen version was changed to have black borders instead of white.

On level 2, room 4, if the player spins the first mouse wheel in the room enough times, they can increase the speed of the wheel by too much. This will cause the player to speed up to incredible speeds when bouncing on the wheel. If they aim properly, the player could also fling themselves into the two wheels on the left, getting them stuck.

If the player completes a level, then resets the level, the star counter will not reset. This can lead to the player gaining more stars than there are in the level, or unlocking levels ahead of time. This bug was fixed in the 2.0 update.

The glitch in action, as there are more stars collected than stars available
Add a photo to this gallery

If the player used the star count replay glitch on a level before the 2.0 update and replay the level after the update, the star count will be reseted. Because the player will lose stars, some planet rescue level will not be accessible even if the player has already completed them. 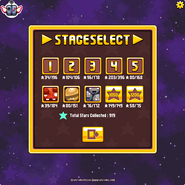 The glitch. Note that levels 9 and 10 are locked even if the player has already completed them.
Add a photo to this gallery

If the moon touches a spike ball while in a pipe, the moon will not take damage.

Falling out of the level

At the beginning of the level 7, where the moon has to rescue Saturn, the moon can use the space mice to bounce above the wall on the left and fall off the level. Upon falling off, the moon will not die, forcing the player to reset the level. A sound was added for death by jumping off the level in the 2.0 update. 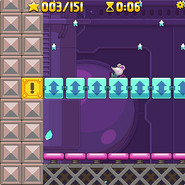 The glitch. Note that the player is not on the screen
Add a photo to this gallery

Sometimes, when the player enters a planet rescue level, the last stage of the level will be entered, where the player has to rescue the planet. Also, the star count will be out of -1 stars.

The glitched star counter
Add a photo to this gallery

Another Lost moons level glitch is if all of the moving tiles in the level are lowered by one block, the level cannot be finished, since some platforms will be in the molten cheese. To fix this glitch, the player has to refresh the page the game is on.

Incomplete section. You can help by adding missing info. Needed: Explain the different controllers.
Cheese Dreams New Moon was made Nitrome Touchy compatible on the day New Moon was released.

The icon
Add a photo to this gallery

Retrieved from "https://nitrome.fandom.com/wiki/Cheese_Dreams:_New_Moon?oldid=203941"
Community content is available under CC-BY-SA unless otherwise noted.