Can bounce on trampoline

Chicks are one of the characters in Chick Flick. There are three variations of a Chick: small chicks, medium sized chicks, and the big chick. All three versions bounce differently.

Chicks have a small yellow body with small wings and feet, along with a small beak and eyes.

Small chicks are the smallest type of chick in Chick Flick.

Small chicks appear smaller than the usual chick. They have the same general appearance, but one eye appears to be larger than the other.

Medium chicks are larger than smaller chicks, still taking on the general appearance but in a larger form.

A chick and squirrels in a tree, in Sandman

A chick balloon in Hot Air 2

A robotic chick and robotic squirrels in Skywire

A medium chick in the Classic skin

A chick in the Party skin

An avatar of a chick

An inflatable chick in the Shop banner

Large chicks, or big chicks, are a variation of chick that appear in the game Chick Flick.

They have smaller eyes, and are much fatter.

Ghost chicks are white, medium sized chicks that fly around in level 8 of Chick Flick.

Ghost chicks have no feet nor eyes and have their wings spread out. They are white with an orange beak.

Many ghost chicks fly around the screen in level 8, and stun the player if it touches either of the squirrels. The ghost chick cannot be bounced, as they just fly around.

If a chick hits them, the chick will fall in a straight line downwards, and the ghost chick will disappear in a whist of white smoke. Other ghost chicks will fly onto the screen and take the place of the ones destroyed.

The bizarre chick is a type of chick in Mobile Chick Flick. From its look, it seems as though it may have bounced off the trampoline at funny angles, therefore making it harder to get in the nest. It is uncertain what its point value was, or its actual in-game behaviour, as it is no longer possible to access this game. 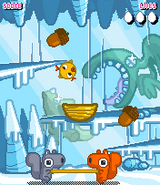 The bizarre chick on level 7
Add a photo to this gallery
Retrieved from "https://nitrome.fandom.com/wiki/Chicks?oldid=202734"
Community content is available under CC-BY-SA unless otherwise noted.