Nitrome Wiki
Register
Don't have an account?
Sign In
Advertisement
in: Cooped Up, Games, Mobile games,
and 11 more

You are the latest addition in the exotic bird sanctuary.

First game to use hidden achievements

The player takes control of a finch who is constantly ascending away from a cage cage using ropes and branches as springs. The player is required to swipe the screen to "twang" the ropes, causing the bird to be flung upwards. The angle and length at which the player swipes affects the finch's direction and acceleration. Along the way, the finch must avoid rival finches as a flock of other finches gradually rises up after the protagonist. The game is over when the player makes contact with a hazard or enemy, hesitates at a safe position for too long a period of time or falls into an open area.

Cooped Up is separated into multiple phases, the first phase introducing the key gameplay elements and enemies and subsequent phases adding new enemy combinations. Each phase lasts 25-28 points, the end of a phase indicated by a chasing bird. Falling items are encountered from phase 3 onwards.

While different combinations for birds are introduced in later phases, the only birds whose combination remains the same are dashing finches, due them having a set behaviour.

This phase introduces all the gameplay mechanics in Cooped Up, save for falling items. The first three ropes have more restrictions placed on what can be encountered.

After this and until the player scores 26 points, the following combinations of enemies encountered on platforms are possible:

The occurrence of branches are very rare in this phase, and because flying finches are restricted in this phase to only occurring above branches, they are rarely ever encountered. Notably, it is possible to encounter a rope with nothing on it.

It is possible to encounter to situations where there are five ropes in a row with just a walking or stationary walking finch on each rope. Similarly, this is possible with big finches, although it is often only four in a row are encountered.

A chasing finch is encountered on the rope for the 26th point.

This phase ends at 51-52 points, where a chasing finch is encountered.

This phase ends at 77 points. 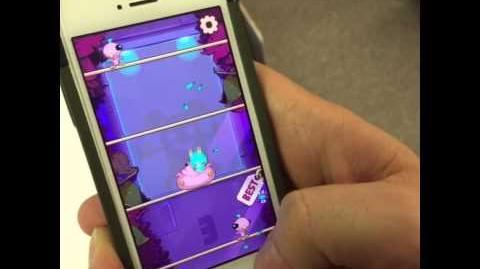 Cooped Up - preview 1
The vine video 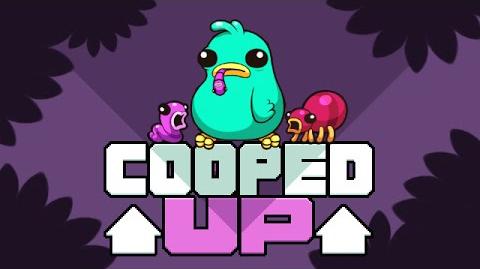 Released on May 6 2015 on Android and iOS, this version of the game contains the initial game. It is labelled 0.1 on iOS.

Released on May 6 2015 for Android, this version fixes bugs and improves minor parts of the game.

Released on May 15 2015, this update fixes the screen flicker bug and also the cross promotion unit appearing in areas with poor reception

Development of Cooped Up started at the end of 2014[1], the game's engine and sprites being the first parts of the game to be worked on. Early on in development the game was given the working title[2] "Feeding Time"[3]. Multiple times the game underwent major changes.[1] The game was first announced on January 2nd 2015.[2]

The earliest version of the game took place on one screen and retained the twanging used in the final game, though the game's overall gameplay was much different than the final version[1]. This earlier version did not work as well as Nitrome expected it to, so the gameplay was overhauled[4]. Despite this, certain elements in this version of the game were carried over into the fully developed version and changed to suit it, some of the game's obstacles and the green bird player character being an example of this.[1]

Due to the drastic gameplay changes the game underwent and the differences between the early and final version, the sprite of the green bird player character had to be redrawn.[1] Nitrome announced in mid March that the game was nearing completion and closer to its release that parts of the game's development would be shared, as the game went through an unusual development history[1]. By the end of March it had been decided that Cooped Up would Nitrome's next released game.[5]

By May 5 2015 the game had been submitted and approved by the Apple App Store, Google Play store, and Amazon App Store[6]. On May 5th a trailer for the game was released and it was announced that the game would be released the following day on May 6th[7]. The game saw an iOS and Android released on May 6th and an Amazon App Store release the following day, but not a browser released due to this version being delayed[8]. The game's browser version was released on June 15th, 2015[9]. While the planned development coverage of Cooped Up has not been posted, there were still plans to do this, but only after the browser version has been released[10].

Aaron Steed voiced the narrator in the game's trailer[11]. During development Nitrome considered releasing one of the game's early versions on their website, one that had gameplay different from the final version, but initially decided not to due to their audience potentially finding it strange that Nitrome would do this before the game's final version was released[10]. Although the build's release was not discounted it was clarified that the possibility would only be after the game's browser release.[10]

Early in development Cooped Up had very different gameplay, which was greatly changed later on due to not meeting Nitrome's expectations[5][4]. An image of this was shown on the Nitrome blog.

Certain elements in this version of the game were carried over into the fully developed version and changed to suit it, some of the game's obstacles and the finch main character character being an example of this.[1] This early version also had rope that could be twanged, which remains in the final version unchanged.[1]

This screenshot contains many elements of the game that were changed or are not present in the final version. The first is that, compared to the final version, the cage seems rather plain, although this is likely due to the game being early in development.

Due to the change in gameplay early on in development, the finch's sprite had to be changed, most of this change being slightly changing the proportions of its body. The early in-development image also shows a large four fingered hand holding a worm, which likely points to one of the special gameplay elements of this version of the game as nothing like it is present in the final version.

The background of the cage shows two people: a boy and his mother. While the boy does appear in the final game, only much larger, the mother character is absent from the game.

Cooped Up was listed by Pocket Gamer as one of the best iOS games released in May 2015[12].