In many Nitrome games, there are references to other media outside of Nitrome in them. Below is a list of the references.

There are several cultural references to be found in the following level packs of Icebreaker: A Viking Voyage.

Mario Blooper
Add a photo to this gallery 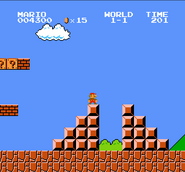 This part of World 1-1 of Super Mario Bros. appears in Mega

Retrieved from "https://nitrome.fandom.com/wiki/Cultural_references?oldid=207046"
Community content is available under CC-BY-SA unless otherwise noted.