Use your chain cannon to create platforms in this steampunk world.

Dirk Valentine and the Fortress of Steam, better known as Dirk Valentine, is a shooter-platform game released on March 27, 2008[1]. The player controls a character named Dirk Valentine who is on a quest to save the Queen Victoria. This game was made a distributable game on September 14th, 2011.

Down - Moves Dirk down a chain

There are 24 levels in Dirk Valentine.

There are two screens that are displayed in the introduction of Dirk Valentine.

The first screen of the introduction

In this level the player gets introduced to the game by a short intro. Monty tells the player about the latest top secret weapon: the chain cannon! There are four guards, for trying out your cannon and at the end there are two prisoners which the player can free, as Monty says, by shooting at the lock. Monty also tells you that the player they can advance to the next area by taking the lift.

In this level Monty tells the player about cannons and the cannon power bar. The player has to go to the right through some guards and some cannons. Now they come at a place with some guards who are protecting a pair of prisoners.

After the Prisoners have been freed, the player go up with help from their chain cannon. When they are at the top of the level, Monty tells them that they can destroy Missiles by shooting them with the chain head. Now, go left to the lift while destroying some missiles.

There is also a glitch at end of this stage. If Dirk shoots from the right place, he can access to the other side of the wall and will drop through it to the start of the level and die.

This is the first time the player faces the Baron. The player has to avoid missiles and where he moves. The below box contains the method Nitrome did not intend for the player to use to complete the level

The player has to shoot chains to gain height and get to the top of the stretch of space. When they get to the top, shoot a chain to brake there fall. Then fall on the moving platform.

In this level Dirk must fight the Baron. This time the Baron can summon enemies. The player has to avoid where the Barons moves. When it reaches the center they have to shoot the side. Do this, avoid missiles, and destroy the enemies until the player completes the level.

Dirk Valentine also marks the third appearance of the light green backwards slash, an image not used in any Nitrome games, and also appears in Snow Drift and Go Go UFO as an unused image.

Unused light green coloured backwards slash (\), likely not even meant to be used
Add a photo to this gallery

The torso image of Dirk's sprites all show him wearing a brown jacket. However, due to the size of his chain cannon, this jacket is never seen. Although not technically unused content, it is never seen by the player.

There are images of Norman Noggin from Headcase in the .swf of Dirk Valentine, images such as this which are never used.

The message image for Dirk Valentine

An image from the Pixel section of Simon Hunter's website contains an early image of Baron Battenberg's Steam-powered Batter-Berger. The only difference this beta version has from its final version is that the beta version has, instead of white hotspots, light green glowing cylinders.

Baron Batternberg's monocle likely was changed from dark red to black because his monocle made him look as though his eye was bleeding, or prior to the battle in the Steam powered Batter-Berger, something had attacked and inured his eye.

Final version
Add a photo to this gallery 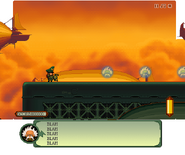 Retrieved from "https://nitrome.fandom.com/wiki/Dirk_Valentine?oldid=206240"
Community content is available under CC-BY-SA unless otherwise noted.