Dirk wears a dark green peaked cap with a black brim and a gold V on it. He also wears a brown bomber jacket and a brown backpack. This possibly holds a parachute. Dirk also wears an eyepatch and has a mustache.

Dirk Valentine is Britian's greatest spy, explorer, and fighter, and was sent into The fortress of steam to save Queen Victoria and to defeat Baron Battenberg. He carries the chain cannon to attack enemies, to make bridges and to free prisoners.

Dirk is armed with a chain cannon that can fire chain links at enemies and create bridges. Dirk can single jump onto higher ledges, and can survive a fall from large heights.

Dirk in the Party skin

Dirk Valentine in the Steampunk skin 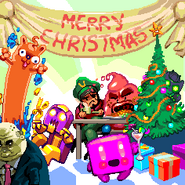 Dirk Valentine in a Christmas blog post alongside Smokey Bacon, Stretchy dog, Takeshi, Zapo, Cuboy and the Nitrome Boss
Add a photo to this gallery

Retrieved from "https://nitrome.fandom.com/wiki/Dirk_Valentine_(character)?oldid=201405"
Community content is available under CC-BY-SA unless otherwise noted.