Navigate your way through this atmospheric puzzle platformer.

First game to only save up to current progress

Ditto is a puzzle platforming game that was released on March 26th, 2014, being made Nitrome Touchy compatible on the same day. The player controls a female protagonist who traverses levels by solving mirror based puzzles. This is Nitrome's first game to deliberately not include a level select screen. Consequently, players can only return to previous levels by starting again from the beginning after selecting "Reset Saved Data" on the options menu.

This game was made a distributable game between December 17th, 2014 and January 4th, 2015[citation needed].

Incomplete section. You can help by adding missing info.
The player simultaneously controls the protagonist and her reflection, which performs the mirror image of her actions. The player must control the character in such a way that neither she nor the reflection is killed. The character is also capable of gliding, which slows down her downward motion without affecting her horizontal movement.

The reflection will only appear when the girl is both in sight of and in line with a mirror. Rather than just mimicking the actions of the player, the reflection will copy the player's relative position in relation to the mirror (i.e. the girl can stand on a block that exists only on her side of the mirror and thereby cause the reflection to stand midair). Interestingly, vice versa works as well, as obstacles in the reflections world will prevent the girl from moving as well. In essence, the girl and her reflection must always be in the exact same relative position, and, as both can interact with objects specific to their own dimensions, movement that would otherwise be physically impossible often occurs. When the girl is in line with more than one mirror at the same time, multiple reflections will appear.

The letters and buttons on the title screen fade away, leaving the main character and her silhouette lying underneath a pillar of white gradient light. The girl wakes, shaking several water droplets off of her body. The player is then given control. Using the arrow keys, the protagonist can move around the area, and must be moved to the door on the player's right in order to proceed.

As the protagonist enters the next room, vertical bars block off the previous room behind her, and the player can hear her gasp for the first time. When she starts walking to the player's right, her shadow will enter from the left, but disappear as she jumps over the thin orange column. After jumping, the main character can continue walking in the same direction until she reaches the door.

Water is present in this level, and causes the player to restart if the girl touches it. Her silhouette is a reflection on the horizontal axis, and no obstacles appear to be in its way upon starting.

A staircase is within the player's view, with a couple of spikes on the third step. A gem can be seen floating next to the staircase, and the player can have the girl jump from any step beyond the spikes to pick it up. A long orange platform is seen, and an upside down staircase with the same number of steps and spike placement are seen within the shadow's perspective. The second encountered gem is found above the staircase in a similar fashion to that of the first gem, except it remains stationary and can only be collected by the shadow. After climbing the second staircase, the girl can now enter through the door.

This level introduces the floating jump, which is necessary to make it across the gap filled with water. A gem can be seen moving in a rectangular clockwise motion. By pressing and holding the jump button while in midair, the player can slow the girl's falling motion to maximize their horizontal movement. If the girl falls into the water, a thought bubble appears over the girl upon her respawning, demonstrating the floating jump. She should be able to land on the next platform, which has the exit. 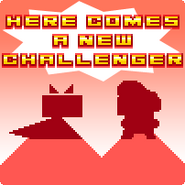 Silhouette of the protagonist on the left as seen on the January 15 blog post.

A moving animation fully revealing the character in the January 30 blog post.

The gameplay GIF, seen in the March 7th 2014 update 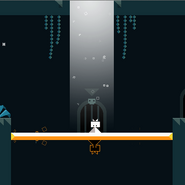 Another GIF about Ditto's gameplay, posted on March 14th

Another picture revealed on March 14th, which shows the progress in adding scenery to the levels of Ditto
Add a photo to this gallery

Level 23 contains a hole in the wall near the exit that can be gone through, though it doesn't lead anywhere and instead off the game screen. Going down this hole causes the girl to move quickly.

It is possible to extend the gem counter farther than the total amount of gems in the game.

Unlike the menus of most Nitrome browser games, Ditto's titlescreen only allowed the player to select from three options: Play, Scores and Credits. The Help section was absent, instead being replaced with a brief in-game tutorial that appears when the girl dies in earlier levels.

A level select screen is also not present in the game, purposely omitted to evoke the game's atmosphere[2]. After clicking "Play", the game loads the most current level the player has progressed to, or the last level if the player has beaten the game. An option selectable by clicking the cog icon lets players reset their save data to start from the first level again.

Ditto was made Nitrome Touchy compatible on the day the game was released.

The icon
Add a photo to this gallery

Retrieved from "https://nitrome.fandom.com/wiki/Ditto?oldid=203903"
Community content is available under CC-BY-SA unless otherwise noted.