Eggs are enemies only found in Bad Ice-Cream 2.

The egg is a yellow oval with purple stripe. The egg's hat is black with a light blue stripe. As an alligator, the egg still has the bottom half of its shell. However, the top is replaced with a green alligator head. The egg also keeps its hat as an alligator.

Eggs will first slowly move around, following a set pattern. If an egg comes in contact with another egg, however, then an alligator will hatch out from the egg and the enemy will start moving around erratically at a fast speed.

Although eggs can only move horizontally or vertically, alligator eggs can move in every direction. If an egg is prevented from moving in any direction, it will stand completely still with a ? on top of it.

An egg after being hatched 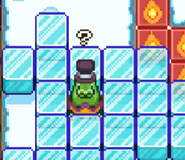