Nitrome Wiki
Register
Don't have an account?
Sign In
Advertisement
in: Articles with incomplete sections, 8bit Doves, Games,
and 11 more

Follow up to 8bit Doves. Collect all the Doves you can for High Score and to unlock more birds!

Endless Doves is an infinite game and spin off to 8bit Doves. The game was launched on both mobile systems (iOS and Android) as a free app on November 12, 2014, with a browser release on November 17.

In the game, the player controls the flying man as he navigates an endless labyrinth of tunnels trying to collect doves.

For the browser version, the controls are the same as the Nitrome Jam 8bit Doves.

The game contains an in app purchase that allows players to remove ads.

The success of endless games funded through ads, such as Timberman, after the boom of Flappy Bird was seen by Nitrome as a new potential market that was yet to be explored. Endless Doves was created to try out this new funding model and also as an attempt to enter a good quality game into a market seen by Nitrome as being populated by several "sloppy" titles, though Nitrome was hesitant that Endless Doves would not be sloppy itself.[3]

Nitrome's decision to release Endless Doves for free was primarily to try out this new funding model, though it also was because they felt uncomfortable charging for an 8bit Doves related app when 8bit Doves had been released only a few months prior.[1] Endless Doves being endless and comprising of no independent levels was found to work better with this type of funding model instead of the level based progression Nitrome was used to putting in their games.[1]

The game was completed by October 24th 2014 and had been submitted to the iOS App Store with a release after it had been approved by Apple. [4] On October 28 Nitrome announced on the blog that the game had been submitted to Google Play.[5] By November 7 both app stores had accepted Endless Doves.[6] Nitrome announced on November 11 2014 that the game would be released on November 12 2014.[7]

By December 2nd 2014, the revenue Nitrome made on Endless Doves exceeded their expectation on what they thought it make.[8] 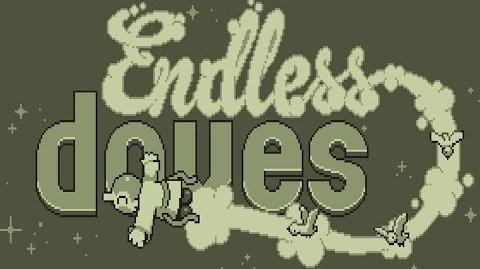 This version was released to fix bugs on both iOS and Android. For iOS, it is called Version 1.1 fixes bugs along with "speed improvements", likely referring to fixing lag related bugs.

This update was released on Android on December 3 2014 and fixes bugs.

Released on December 4 2014 for Android and pending release on iOS, this update adds two new Christmas themed entities to the Aviary.

Availability on other platforms

Although Endless Doves was released for iOS and Android (Google Play), Nitrome has not ruled out an Amazon App Store version.[9]

The appearance of the Nitrome Jam 8bit Doves launching device 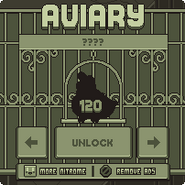 Early page for the chicken (120 doves)

By November 21, 2014 Endless Doves had been played 6 million times[11] on both iOS and Android.[12] Of those players, 75% (4.5 million) got a score between 0 and 5 doves.[13] The amount of revenue Endless Doves brought in exceeded Nitrome's expectations on what they would make.[8]

The revenue Nitrome made on Endless Doves by December 2nd 2014 exceeded their expectation on what they thought it make.[8]

The game, along with 8bit Doves, was downloaded a lot in in Japan[14].