Nitrome Wiki
Register
Don't have an account?
Sign In
Advertisement
in: Articles with incomplete sections, Feed Me series, Browser games,
and 8 more
English

View source
watch 01:36
We're Getting Mutants in the MCU - The Loop
Do you like this video?
Play Sound

Bite the environment and drag yourself through the green house.

Feed Me is a platform game released by Nitrome on July 31st, 2006[1]. The player plays as a venus fly trap who is trying to escape a greenhouse. It is Nitrome's fifth released game.

Each level consists of the player using the mouse to move the venus fly trap along the level while avoiding obstacles to an exit door at the end. There are also three watering cans in each level that can be collected for bonus points.

The level select screen of the game is portrayed like a map. It appears as the inside of a greenhouse with a trail running through it, and 15 white dots along the trail. Each dot represents a level, and displays information about the given level when clicked on, such as the name and number of watering cans the player has collected in the level. Clicking the "play" button will enter the level that is currently selected.

This is the first level of the game. There are a lot of signs that can help the venus fly trap on how to move through the level, as well as how to play the game. This level contains only flies and thorns. The maximum neck length is 150.

To complete the level, the player should eat the fly, then follow the targets on the floor, and then eat the two flies, and collect the first Watering Can. Climb on the ceiling until it ends, then go up the wall.

Structures that appear in this level include purple trees with purple fruits, and two platforms. There are flies, bees and thorns. The maximum neck length is 130.

To pass the level, at the start, the venus fly trap should eat the two flies and the watering can. Move on the ceiling for a while, then stop over the fly, but stay on the ceiling. Now, when the platform comes, drop onto it. Eat the fly, and use the increased neck length to reach a watering can.

Now, on the lower level, bees are introduced and should be eaten, along with a fly. Grab on to the bottom of the platform, and move to the end. Before this, on either side, the venus fly trap may stretch out over the thorns to get the last 500-point watering can in this level.

This level contains big mushrooms and a bush at the end of the level that makes big green melons. There are dragonflies, thorns and melons. The maximum neck length is 120.

The player should now climb up by biting in the walls, then go up so the melons do not hurt the venus fly trap. When the venus fly trap is near the thorns, fall and move quickly, because another melon will appear.

In this level appears some orange trees and bushes. There are bugs and thorns. The maximum neck length is 115.

Get the first watering can and go into the hole for the second. Eat all the bugs and then continue right. Get across the spikes by grabbing all of the small platforms and then dropping down. Try to land on the platform by grabbing the wall, then eat the last Watering Can. Grab across the lower parts of the platforms to get to the door.

In this level appears bushes, giant carrots and small carrots. There are snails, flies, bees and thorns. The maximum neck length is 120.

In the first part of the level, conveyor belts are introduced. After eating the snail, the player can go through a false wall to get a Watering Can. Proceed up and then eat the snail, followed by some climbing and fly eating. The player must then eat the watering can, although if he doesn't want to fall, he can miss it, as all watering cans are optional.

Climb the ceiling and eat the bee, and get the watering can if it is found to be safe. Proceed on the ceiling and climb onto the conveyor belt. After a little resisting, climb the wall and get to the door.

In this level there are big plants, mud, and some tomato plants. There are bugs, tomatoes, spiders, thorns and caterpillars. The maximum neck length is 165.

For the last part, the player must climb as high as he can go, and stop as the spider comes, then keep climbing. Then he must just drop, avoid the thorns, and finally exit through the door.

Small fat cacti, large thin cacti and lots of vines appear in this level. The walls are rocks, so they cannot be climbed. In this level the screen can only move vertically, not horizontally. Flies only appear on this level, and the maximum neck length is 125.

At the bottom, the player can eat the flies and watering can. As the walls cannot be climbed, the player must use the vines to get to the top. The player must shift vines as they get close, but they can risk of falling to get the other two watering cans, as well as three more flies. At the last vine, the player must cling to the little notch near the exit's ceiling, then move off when ready.

At the start there is a watering can and a spider. Eat both, then cross the spikes on the ceiling, drop down, eat the bug, and fall. Now the player should cross over on the bottom of the platform, climb onto the ceiling, get the watering can if wanted, and drop onto the platform. The player must then climb the wall/ceiling and get the last watering can, followed by getting to the top and, finally, leaving.

This is the ninth level of the game and in it are very tall palm trees, tall palm trees and melon bushes. There are thorns, bugs, and melons. The maximum neck length is 120.

In this level, the player must dodge melons in four rows, by clinging to the ceiling's deeper parts as they come. The corners are hard, but if the player is fast, they can drop down, get a watering can, and come back up. All three watering cans are obtained this way.

To start, drop down on both platforms, then, cling to the wall and then the bottom of the second platform to ensure a safe landing. The player can then either go up a perilous climb for a watering can, or skip it and fall. Drop on the ground to meet a new bug, the woodlouse. cling to the ceilings as it rolls, or it will hurt the plant. Proceed right, until a wall appears. Climb it, making sure to change sides so the Plant is always on or above solid ground.

At the top, the player can either go up for a Watering Can or hurry to the end by going on the bottom. After a large drop, the player can choose whether or not to get that last Watering Can. This one is really dangerous too, so if the plant is low on health, don't try this. Drop down between the thorns and then eat the butterfly, followed by clinging to the bottom of the platform then to the ceiling. Then, finish on the ceiling or floor to the exit.

Incomplete section. You can help by adding missing info. Needed: Proper walkthrough without the glitch, as the glitch is a bit hard to perform.
In this level there are mud areas, some bushes, a lot of bugs, a lot of tomato plants, and thorns. The maximum neck length is 135.

The fastest and safest way is to use a glitch to get right to the end by eating all the bugs, going back to the start, and constantly grabbing the ceiling and upper wall until the plant is at the end. But if the player wants to get the watering cans, he must cross the thorn patches on the ceiling while dodging tomatoes, and then get to the second floor. The watering cans are simply encountered on the path to the end.

Appearing in this level are big sunflowers, a small sunflower, and conveyor belts. There are flies and thorns. The maximum neck length is 120.

Appearing in this level is a big green cactus, a vine, and platforms. There are caterpillars, thorns, and bees. The maximum neck length is 110.

Climb on the bottom of the first reach-able platform, then grab the other two and drop on the one with a caterpillar. Eat the caterpillar, then climb to the top of the wall and either drop down and eat the Watering Can in mid-air, or just cling to the moving platform at top and skip it.

Drop onto the stairs and go down for a watering can or skip it and go for the vine at the top. Grab the vine and ride it to the top, Then grab the Watering Can, and drop onto the platform and ride it. Finally, grab the ledge, go into the little nook, and then go through the door.

In this level appear rock walls, small and tall trees. There are bugs, thorns, dragonflies, butterflies. The maximun neck length is 160.

Start by dropping down and eating as many bugs as possible and the watering can. grab the right wall and climb up, and grab the ceiling, and then drop down, grab the platform from the bottom.

Then ascend the steps to a wall, and climb it all the way up for watering can #2. Continue on the bottom of platforms and make it to the door, with the option of getting the last Watering Can.

In this level appear tall blue tulips, platforms and a lot of thorns. There are butterflies, thorns.

Hazards are portrayed as different plants, and each one will deal one heart of damage to the player on touch.

Bugs are found around the levels and can be eaten to increase the venus fly trap's neck length. They each stay in one area, but have different movement patterns.

The Venus flytrap biting the air 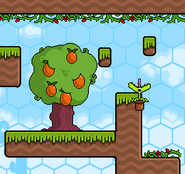 The Venus flytrap stuck in a platform 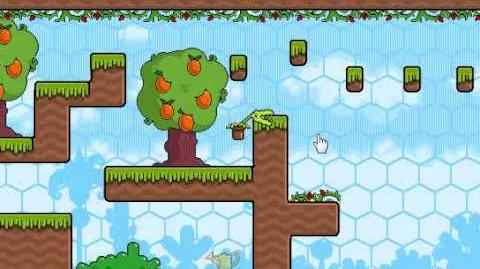 Feed Me level 4 glitch
Replicating the glitch in level 4

One variant of the tomato glitch

Another variant of the tomato glitch

The titlescreen for Feed Me

The slider animation for Feed Me

Feed Me's core game mechanic drew inspiration from Mat Annal after wondering how a venus flytrap would work if it was incorporated as the main character of a game.[2] In retrospect, Nitrome found that the neck extending function of the venus fly trap did not add much to the game[3]. The game went into development, initially being called Miracle Grow, but was eventually renamed to avoid potential conflicts with a similarly named trademark of a garden product.[4]. The game's final name, Feed Me, was based off the musical Little Shop of Horrors[5].

A pre-release page for the game with the URL http://www.nitrome.com/games/miraclegrow was present on the Nitrome site on July 2, 2006. This URL was supposedly used to showcase the game to Miniclip.[6]