First and currently the only prequel ever released by Nitrome

Final Ninja Zero is a shoot 'em up platform game released on April 8, 2009. The game is the prequel to Final Ninja, and takes place chronologically forty years before the first game. This game was made a distributable game on May 9th, 2012. 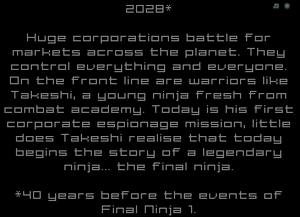 The prologue to the game, Takeshi has invincible samurai guards accompanying him as he runs across the dock against many S.W.A.T. units. At the end of the level, the player is zapped by Maxwell Merlock and put into a holding cell.

This level introduces the player to the basics of the game. It introduces the ways to move the character, drone mines and the sushi to regain health.

This level introduces trip wire lasers. Since there are many trip wire lasers, the level also teaches the player to utilize stealth. A few stray drone mines are also encountered throughout.

This level introduces the usage of force fields, which the player needs to destroy the generator in order to disable the force field. Also, a major topic for this level is wall sliding and climbing techniques which are useful in areas with electrical walls.

This level involves many sentinel guards in which Takeshi has to navigate through. There are also lots of areas with electrical walls, which restrict rope movement.

This level introduces rotating guns, which can be destroyed, unlike fixed cannons. Two sniper units are also introduced in this level as well as cables that hide Takeshi from them.

This level introduces the green mines, which the player has to use to control it in order to access an out-of-reach area to destroy a generator. It also introduces the clone scientists which trigger the alarm when they spot Takeshi.

This maze-like level involves using stealth orbs multiple times to get through various areas with large numbers of clone scientists. Around the end of the level, the player has to chase Dr. Boshi through an area heavily guarded by mines. In the end, the player is attacked by Maxwell Merlock and gets placed onto a service lift.

Takeshi's first battle with Maxwell Merlock occurs in this level. The player has to shoot at the boss while avoiding the chains of energy orbs the boss shoots towards the player. The player also has to be careful not to fall off the elevator.

This is a level heavily guarded by cutting lasers. Because of these lasers, this level is tricky and requires very precise timing in order to complete. In the end, the player has to climb a wall with the cutting lasers moving up and down the wall.

This is a rather short, but tricky, level. In the beginning of the level, it introduces the cyborg monkeys, which can be tricky to navigate through. The second part of the level involves sentinel guards with cutting lasers, which cannot be destroyed with ninja stars, so the player has to control a green mine and carefully navigate it to the guards to destroy them.

This level requires speed because just like Level 9, the player has to use stealth orbs to navigate through many areas with multiple clones. At the end of the level, the player has to find and kill Victor Boshi, which would render the Force Field blocking the Exit no longer disabled.

This is a very long and difficult level that requires speed, sneakiness, good timing, and orientation. This level has multiple snipers, so at almost all the points of the level, the player will be followed by sniper crosshairs. The player has to move very quickly, but also needs to avoid making careless mistakes. Good orientation is required because this level is huge.

This level is an ultimate test on dealing with moving blocks. This level contains many small moving blocks so the player must be very careful to avoid being squashed by them.

This level contains many enemy samurais. One tricky thing about this level is the combination of SWAT units and samurais. Sometimes a SWAT unit is hidden behind a samurai so the player is unable to kill these SWAT units since the samurais block the attack.

This is an all-around level that contains many elements of the game. The beginning part of the level involves quite a bit of tricky missile dodging. The middle part of the level involves finding and destroying force field generators while dealing with the always tricky simian units. And the end part is probably the toughest and most frustrating portion of the entire game.

This is a very huge and long level. The first half of the level is rather easy because Takeshi has a companion (Snowfox) alongside with you, which is very helpful in destroying guards with cutting lasers. The player must be careful not to get left behind, or else Snowfox might not be able to destroy all the enemies.

The second half of the level is very tricky, which involves the ultimate test of stealth, needing to navigate across a large area heavily guarded by sentinel guards and security lasers. In the end of the level, the player is attacked by Maxwell Merlock again, and is sent on a service lift again.

This level is the final boss battle. The difference this level has comparing to the first boss battle is that, for this boss battle, you cannot directly use ninja stars to lower his health. The boss is shielded now, which means that you have to use the green mines to attack the boss.

What makes this level very tricky is that the player has to navigate a green mine to the boss, this in the meantime while avoiding the energy balls, and needing to stand in an area unaffected by the path of the energy balls.

This is the epilogue level of the game. Just like the prologue, Level 0, the player is well protected by samurai guards, which could help destroy most of the enemies. The player is also protected by Snowfox who destroys all the large machines. An easy level, but the player has to be careful to keep pace, and not to get left behind.

A transmission from Dr. Boshi on level 13 right before he is killed by Takeshi

The Transmission from Monty on level 15

A transmission from a clone on level 16

A transmission from Maxwell Merlock on level 17

Although the game files of Final Ninja Zero contain no unused content, Simon Hunter, the game's artist, put up on his website beta or unused content relating to the game. Unless otherwise noted, the content in this section is from his website.

Although this text is used during regular gameplay, it is only used on platforms the player goes on, not in the background.

Behind the computer screens in the below image, there are computers in the background. These computers are never used in Final Ninja Zero, and were likely cut because they would seem out of place in levels.

Content in this section is content that was included in Final Ninja Zero, but were slightly changed before release.

The machine used by Maxwell Merlock was changed in the final version of Final Ninja Zero. The beta machine contained mines on the outer circle of the machine, along with several large wires. These mines and the wires were removed from the final model. These enormous mines may have been used in a beta version of the boss battle, although it is possible they were added just for decoration. 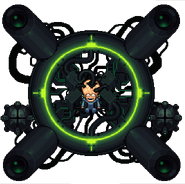 The beta machine used by Maxwell Merlock. Notice the wires and giant mines outside the machine 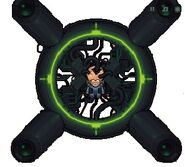 SWAT Units originally had sparks come off the gun that were highly exaggerated, these sparks being very large, covering the entire front of the gun, expanding very far forward, and going down far enough to pass the enemy's arms. The gun sparks were likely toned down as they seemed incredibly unrealistic for a game such as Final Ninja Zero, which was meant to be a serious stealth game.

Alternatively, the sparks may not be gun fire but be another type of weapon, such as a flamethrower.

This image is presumably an early version of the simian unit, perhaps an possible version for this enemy among other designs, as the only difference it has from the final version is that this beta simian unit has lighter colours, a yellow eye instead of orange, and no shading on the image.

Final
Add a photo to this gallery

The power orb machine that distributes power orbs, this machine was slightly changed from its final version. The early version had wires at the bottom left and bottom top right of the machine, furthermore, the upper middle opening in the machine, this used to be rectangular, but in the final version of Final Ninja Zero, is jagged.

Discovered on Simon Hunter's website is an image of a beta sentinel unit. This unit appears as every regular sentinel unit, with the exception that it lacks a gun and has a green light instead of an orange light.

With the exception of the green light, it looks exactly like a regular sentinel robot.

An upgraded sentinel robot
Add a photo to this gallery

Found on Simon Hunter's website is an image of a regular sentinel unit that has an orange light (this light being the colour of the light of usual sentinel robots). Unusual about the sentinel is not only that it lacks a gun behind it, but instead, has two wall mounted guns on each side.

If this is true, then it would have likely not been able to be spawned into levels when the alarm is set off (due to its size), and may have been able to rotate its guns. If this is in fact true, it was likely cut due to its size and limited use in levels, as very few levels of Final Ninja Zero take place in rooms with aggressive enemies that try to kill the player.

What is most likely is that this image may be a fusion of two wall mounted guns and a sentinel body with an orange light, if this is true, it may either be an attempted recreation of a very early design for a sentinel which Simon Hunter did not have, or an attempt by Simon Hunter to make a new type of sentinel, this supported by how the left wall mounted gun is placed to close to the left of the sentinel, while the right wall mounted gun is placed close enough to the sentinel to make it look as though it was meant to be connected.

An upgraded sentinel robot
Add a photo to this gallery

If Takeshi exits the lift to level eighteen then quickly reenters it, he will be transported to the next level. This means that the player can access level 19 without ever having to complete level 18. Strangely, this only works for level 18, not any other level.

Sometimes, the high scores buttons will be broken and display strange characters.

By pressing the the left button (the one that moves he scores back ten scores) on the high scores fast enough, it is possible to see the 101st score.

The glitch in action
Add a photo to this gallery

Retrieved from "https://nitrome.fandom.com/wiki/Final_Ninja_Zero?oldid=204782"
Community content is available under CC-BY-SA unless otherwise noted.