Nitrome Wiki
Register
Don't have an account?
Sign In
Advertisement
in: Articles with incomplete sections, Flightless, Unreleased games,
and 5 more

For the demo, see Flightless Demo.

Flightless is a multiplayer platforming-exploration game that was being developed for the Mac and Windows operating systems[4]. The game was first announced through a preview image on September 27, 2011. More information about the game was revealed on October 15, 2012 and it was on this day that Nitrome posted the game to Steam Greenlight and released the game's demo. The game was greenlit on August 28th, 2013. As of March 30th, 2020, Nitrome is currently not working on Flightless[5].

Flightless is an exploration puzzle game where the players controls a duck. The game is described by Nitrome as a Metroidvania, mixing the elements of the 2D Metroid games and elements of the 2D Castlevania games. Flightless does not have any levels, but is instead divided up into rooms. Each room somewhere has an exit to another room. As the player is a flightless, jump-disabled bird, the player relies on creating magical ladders to progress through each room.

Creating a ladder will cause to move vertically up, until it hits a platform of wall. Upon coming to a stop, the player can climb up this ladder. The player at any time can move horizontally off the ladder, or continue climbing up it. The player cannot create a ladder while still on a ladder, the player can also only have one ladder at a time, creating another ladder causing the previous one to disappear.

Ladders can be used to kill enemies and get gems, but are mainly used for climbing to higher up areas. If a duck is killed, it will respawn in front of the entrance to the room they entered. Enemies can be killed by the player's ladder, however, the full game may have certain enemies impervious to damage from the ladder.

Flightless was being developed during the development of the Nitrome 2.0 skin, which was released on August 25th, 2011. The game was announced on September 27th, 2011[6]. The game as referred to by Mat Annal in a Gamasutra interview, though not by name.[7]

On October 15th 2012, Nitrome officially unveiled the game's demo and that it was pitched to Steam, directing people to go vote for the game.[8] At this point, Nitrome had to get enough votes in order to fill a bar up to 100%. Votes for the game managed to slow down as of November 9th 2013[9], although later the game managed to be filled to 98%[10]. On December 7th, it was announced that Flightless had filled the bar completely and reached the top 100 Steam Greenlight games yet to be greenlit[11]. From then on to when it was greenlit on August 30th 2013, Flightless mainly wavered between between spots 80-70 of the most popular Steam Greenlight games yet to be greenlit.

During the time it was in the top 100 Steam Greenlight games yet to be greenlit, Nitrome had half given up on the project[15], the game being greenlit surprising them.

The game becoming greenlit caused Nitrome to return to the project and decide what was to be done with it[16], prior to this happening no new advances in development being made[16]. Although the game's long time in the greenlight phase gave Nitrome lots of time to work on the full game, the game's length in greenlight negatively effected the game's development[17] to the point of Nitrome "half working" on the game[15].

In June 2014 Nitrome shared how they were not working on Flightless [18], and explained later on that this was due to lack of a larger dedicated team on the game, time, a proper structure, and also needing to finish some other projects before resuming work on the game. [19][20] As of November 2014 the game is still not being worked on.[21] In January 2015 Nitrome also added that they are not working on Flightless due to lack of funds for the project. [22]

In late June 2015 Nitrome shared how their reason for not working on Flightless had changed, saying that its development would not work with Nitrome's current setup of developing mobile games and expansions to them[23]. They said that in order to develop Flightless they would have to either be very settled in mobile and put aside a small team to work on it or integrate Flightless' development alongside work on other mobile games[23]. Nitrome also said that either of these possibles could eventually happen[23].

On July 2nd, 2015, Nitrome introduced the possibility that they may not return to development on Flightless[24].

Nitrome mentioned that they will look in to porting Flightless to other systems, including Linux[4].

Nitrome released a preview image of the game they were currently working on, also announcing the artist of the game.

The game's programmer, Aaron Steed, announced on his Twitter account that he wanted play testers for it before it was pitched to Steam Greenlight[25]. Playtesters assisted in the development of Flightless' demo.[26]

This game was accepted by Steam Greenlight.[27]

The game's name was announced and a few videos were uploaded by Nitrome. A demo of the game was released on Nitrome.com. 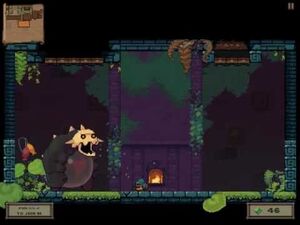 There are several advertisements Nitrome made in order to promote Flightless.

The first was a small advertisement placed in the "Nitrome" section of the main page. Clicking on the ad would link the player to the Flightless Greenlight page.

The second was an advertisement "banner" that was uploaded to Nitrome's Facebook page. This ad encouraged fans to vote for Flightless on Steam.

Also, another ad can be found when waiting for a distributable Nitrome game to load. After the sponsor ad, a randomly selected ad made by Nitrome will pop up- one of these being for Flightless. The ad encourages fans to vote for Flightless on Steam.

On December 12, Nitrome updated their site, adding several larger ads to their website. These ads included ones for Flightless. These advertisements encouraged fans to vote for Flightless on Steam.

An ad the features the demo

The Flightless ad that includes a purple bat

The Flightless ad that includes a red slime

The Flightless ad that includes a beetle 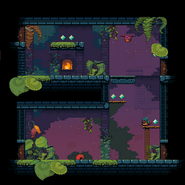 The image as previewed on the blog. 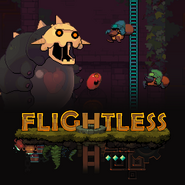 The image as seen on Steam Greenlight

The Vote for Flightless Widget on Greenlight 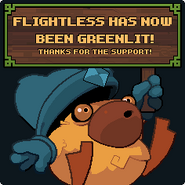 Thank you banner on Nitrome Blog