Nitrome Wiki
Register
Don't have an account?
Sign In
Advertisement
in: Articles with missing walkthroughs, Articles with incomplete sections, Fluffball,
and 11 more

The game that we were not going to release... now released!

Fluffball is a cancelled Nitrome game that was later released on March 5th 2015. The player controls the fluffball as they navigate him to the end of levels.

The game was developed and finished in 2007 for Miniclip, and even though it went through many revisions, it was cancelled due to dissatisfaction with the final product.[1] After a recent lineup of mobile games, later on due to a drought in browser games and known interest, a version was made available on Nitrome.com on March 5, 2015.

Controls were modified upon Fluffball's release to the Nitrome.com site.

In each level of Fluffball the player has to guide the fluffball to the finish tile. The player must do this without letting the fluffball come in contact with any hazards or enemies, or letting it fall off the level. In order to unlock levels, the player can also collect gems along the way by pushing the fluffball over them. These gems are for scoring purposes only in the Miniclip build, but are necessary to unlock additional levels in the Nitrome.com rerelease.

This level consists of a winding path, mostly surrounded by a blue enclosure. The player is required to move fluffball to the right, then forwards, turning left at the corner. The path widens near at the start of the longest forward corridor, where the only borderless side of the level exists. Three bushes are scattered where the enclosure's boundaries end. Moving fluffball to the right, among the bushes, will lead to the goal.

Level 2 introduces the first enemy encountered in the game, the circular purple enemies. One is first seen walking horizontally at the end of the diagonal before the path winds right. At the end of the right corridor, another purple enemy can be spotted, walking back and forth vertically as the path veers forward. Unlike the previous level, this level has mostly no borders that prevent fluffball from falling off, except for a few bushes near the start and end of the level and a couple blue walls at the end of the path before it changes direction.

This level also introduces disappearing tiles, which must be crossed to reach the grassy patch on the left side. On this piece of land is the goal, which can be reached by moving downwards.

This level mostly consists of moving along a horizontal strip of land that branches upward and downward, forming multiple intersections. Most of the path is scattered with pieces of blue brick walls, while the outer edges of land have no barrier. The gems are mostly scattered along each branched out path, with some gems on the edges where Fluffball could risk falling off. The finish is designated at the far right end of the main path next to a section that protrudes upward in view of the screen.

Mud is introduced to this level. The path is long and narrow, and involves weaving up and down while preventing Fluffball from veering off to the sides. Fluffball starts by moving downwards, then turning right at the bushes. Avoiding the purple enemy over the patch of mud, Fluffball continues upwards until a pair of bushes is encountered.

The player should now move Fluffball slightly to the right and avoid the horizontally moving enemy as they proceed down. As no bushes are located at the turn of this path, the player must be careful to slow Fluffball near the end to prevent falling off the edge of the path. Fluffball moves to the right and should stop when a small puddle of mud is landed on. The player should continue moving Fluffball up, over another patch of mud, until the finish line is reached.

After passing the slippery tiles, the path begins to make a down-right diagonal, with two purple enemies walking in the area. One enemy paces back and forth vertically, the other horizontally. The trail veers right, then pivots upward. A patch of slippery tiles is seen at the corner, with three gems on or around the edges.

As the path continues upward, it begins to shift to the left, where a section of slippery tiles occupies the right portion of the route. The player must pass three horizontally walking purple enemies before they can reach the goal.

This level's track is diamond shaped and involves travelling along a thin path around a fence to get to the finish, accessed through the far right opening. The outer edge has no barrier, and players can stay close to the fence to avoid falling off. Gems mostly line the entire outer path of the level's route. Once the player reaches the right corner of the diamond, they can turn Fluffball left to land inside the finish.

Fluffball was made back when Nitrome had a deal with Miniclip to make games, this version of the game, referred to on the article as Miniclip version or mouse version, was initially the finished version of the game and the one submitted to Miniclip to post on their website. However, due to both Nitrome and Miniclip being dissatisfied with the quality of the game, it was not released. After that Nitrome did more work on the game to improve its quality before abandoning the game.

The Miniclip version of the Fluffball game is different from the Nitrome version in several ways, the most notable being the controls. In the Miniclip version the player pushes Fluffball around using their mouse to do this. The player's mouse appears similar to a shining asterisk, clicking causing a shining bar of stars to form that is used to push the fluffball around. Although the bar will not tilt, regardless of where the player's cursor is, whenever they click the line of stars will always face the fluffball.

When pushing the fluffball the screen would not scroll, only shifting in one direction if the player reached the edge of the screen. There were a few glitches with the games due to the line of stars, one of these being quick pushing of the line into the fluffball causing it to go behind the line, and another that allowed the fluffball to move on air.

Aside from this, there were also a few other differences from the Nitrome version, these being:

The major change to this game from the Miniclip version is that keyboard controls are used instead of the mouse. This change causes the help screen to also be changed to reflect the change into controls. Along with this, the menu is slightly changed to make "Play" more noticeable.

Because Nitrome did not intend to release this version but did so due to interest in the game, a message was added to the start of the game before the startup to notify the user that the game was initially cancelled.

Fluffball was developed in 2007 as part of Nitrome's partnership with Miniclip, development at one point taking place in May 2007.[2] During development the game was called "Furball".[3] The game was finished and submitted to Miniclip to be released[1], Miniclip posting the game on the back of site but not linking to it anywhere on there[1]. Due to both Miniclip and Nitrome's dissatisfaction with the the game it was not released[1].

At this point Nitrome tried to revise the game and after multiple revisions Nitrome decided to cancel it, the final revision of the game replacing the game's mouse controls (used in the version submitted to Miniclip) with keyboard ones[1]. This cancellation happened in 2007[4] and was due to Nitrome not liking the game's controls (both arrow keys and mouse) and not being satisfied with the game's level design [5].

Despite the game's cancellation neither the game's Miniclip page[6] nor the Nitrome slider animation, Nitrome Google search image[7], or Nitrome.com 1.5 icon[8] were taken down, though the game's actual Nitrome.com page was mostly taken down (it redirected to Nitrome.com instead of redirecting to the games page)[9].

On March 2nd 2013, the game's musician Lee Nicklen shared on the NitromeMusic Facebook page how he had found the two tracks he had made for Fluffball and how the game had not been released[2], Nicklen subsequently releasing the tracks on his website[3][10].

The full Fluffball game was later discovered by Nitromians in August 2013[11], whereupon the "Fluffball" article (that had previously only had pertaining to what Lee Nicklen had said) was expanded with content pertaining to the game and a link to the game on Miniclip.

On January 1 2014 when asked about Fluffball Nitrome showed interest in writing a blog post or doing something about the game as it had underwent a "long and potentially interesting" development cycle.[12]

From the discovery of the full Fluffball game onwards Nitrome was consistently asking about the game, though not as much as the amount for other cancelled games.[13] It was due to all these messages that Nitrome in 2015 decided to release the full game on Nitrome.com. This was foreshadowed in the Magic Touch: Wizard for Hire release blog post on February 26 2015 and was meant to make up for the drought in browser releases[14], as there had been no browser game releases for the entire year.

Fluffball was released on Nitrome.com on March 5 2015[15], the version released being the Nitrome version, the final version of the game made by Nitrome before it was cancelled. The release of the game caused the game's page to be made functional, the game's slider animation to be used and Nitrome 2.0 icon created. Although the Google search image was used, it was updated, so it is different from the intended original one. Fluffball was Nitrome's last released Adobe flash game[16].

Fluffball oddly uses a large amount of assets from previously released Nitrome games, and not in the form of cameos. The amount of used assets is comparable to that of Jelly Beanstalk.

Cameos in other media

Fluffball in the Party skin 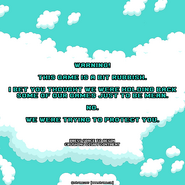