Nitrome Wiki
Register
Don't have an account?
Sign In
Advertisement
in: Pages with reference errors, Unreleased games, Games,
and 6 more

Four Play is a mobile phone game created by Nitrome as a test[2] for Flash Lite. Released on August 7th 2005[1], the game was released when the Adobe website began to showcase Flash Lite projects[2], for anyone to download and play on their phone.

This game is one of Nitrome's early games, made and distributed before Nitrome transitioned from cellphone games to internet browser games. Nitrome's decision to not put the game on Nitrome.com was because the game was viewed as a test game[2].

Navigate through the menus

Select an option in a menu
Page up: go back to the previous page
Page down: Go back to the menu (only on first page of multiplayer)

Four Play plays exactly the same as Connect Four, with coloured aliens as pieces to be dropped on a grid and the objective being for one player to get a horizontal, vertical, or diagonal line of four or more aliens. The game contains a single player[3] and multiplayer mode[3]. In single player mode, the player plays against an AI opponent[3] named "phone", while in multiplayer mode, two player's play against each other. 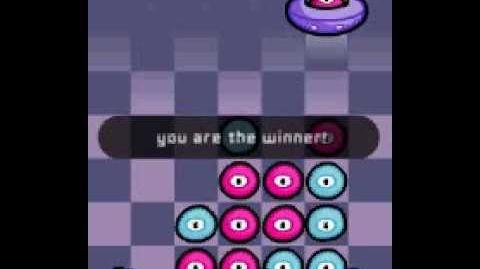 In multiplayer mode, the players plays against an other opponent who is currently playing the same game in multiplayer mode[note 1]. When the first player enter multiplayer mode, they have to enter a username to identify themselves[note 1]. After that, the player connects to the internet and enters the server lobby. The player has to wait until somebody else enters the lobby as well[note 1]. When this happens, the first player will be able to select the opposing player's name from the list[note 1], and send an invitation[note 2] to them to start a game. When the second player accepts the invitation[note 2], the game starts. During a game, the message "lost player" appears if the opposing player leaves,[note 3], and the player presumably returns to the game lobby. 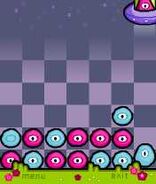 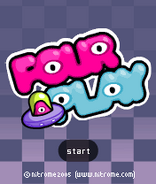 The first part of the menu screen

Four Play contains multiple menus, and is quite different in terms of menus than regular Nitrome game. 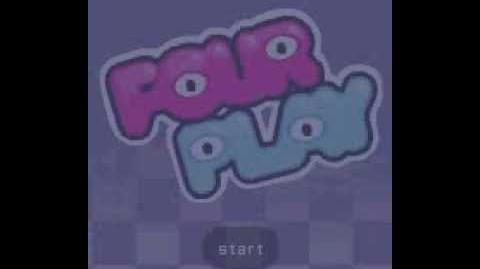 Pressing enter will take the player to the menu 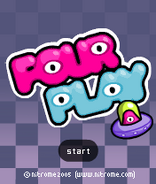 The menu contains five buttons, the five buttons being "options", "about", "one player", "two player", and "exit". The player can navigate the menu by using the

buttons, and selecting an option by pressing enter. The "about" button leads to the about page, "

one player" starts a game with a computer controlled player, "

two player" starts two player mode, and "exit" does nothing. The options button cannot be accessed at all. 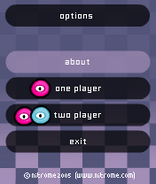 The about page contains a semi-transparent black bar at the top of the screen that is labelled "about", and below this being a box that contains information on the game. Below this big box are "back" and "exit" buttons. This page informs the player about the game's story and also about information about the game's creators and the game's development. The following content is in the about section:

Every cosmic solar cycle, the pinkies and blueys travel back to their home planet to mate and reproduce. As always there is a scramble for available space. Their courtship ritual dictates that they must form a row of four of their own colour in order to mate. Taking it in turns, the aim of the game is to form a row of four before the opposing colour does so. In doing this you will ensure the survival of their species!----------------------Four Play was created by Matthew Annal and Heather Stancliffe of Nitrome to evaluate the Flash Lite player and as a demonstration of what can be achieved with it. -----------------------Nitrome develop [sic] java and flash based games and interactives [sic] for the web and mobile devices. For further information visit our website: www.nitrome.com or email us at: info@nitrome.com 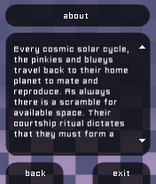 Starts a one player game.

Starts a two player game. This section has a bar at the top that reads "enter a user name:", below this being another bar that the player can interact with, and below this is the background of the page. Clicking on the lower bar (on a computer), or pressing the "tab" button on a keyboard, allows the player to type an eight letter name.

If a player joins, the player would somehow be able to invite them to a game by sending an invite to them. This invite can be accepted or declined. Presumably, after accepting an invite, the game would start. 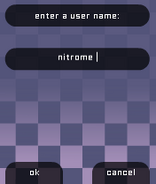 The page, with "nitrome" as the username

The player can scroll upwards and downwards by pressing

, respectively. A triangle is highlighted when the player moves in that direction. At the bottom of the screen are the "back" and "exit" buttons. When a player joins, the player can send an invitation[note 2] to them to start a game, and if they accept, the game starts.

When accessing the game lobby, the player's computer/phone will try to connect to http://www.nitrome.com/connectfour/joinlobby.php?playername=" "playername" [note 3] 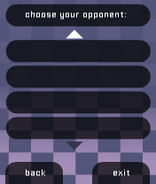 This button, when selected with Enter, should send the player back to the splash menu, however, it does not.

A completely inaccessible option. It is not known what it contains.

The about page of the game explains the story behind the game:

"Every cosmic solar cycle, the pinkies and blueys travel back to their home planet to mate and reproduce. As always there is a scramble for available space. Their courtship ritual dictates that they must form a row of four of their own colour in order to mate. Taking it in turns, the aim of the game is to form a row of four before the opposing colour does so. In doing this you will ensure the survival of their species!"

Unlike Mobile Chick Flick, Four Player's graphics are all done in .svg instead of .png and/or .jpg. The only graphic not in .svg is the game's logo. Notably, although everything being in .svg would likely improve graphics, this is quite the opposite in terms of text. When viewed at the screen size of a Nokia phone, some text appears semi-blurry around the edges, and not as clear as when seen at a higher screen solution.

Four Play was only reviewed by one site, Frame27[3], which praised the game's art and design being "professional", but criticized the game's sluggishness—this slowness likely being how long it takes to drop an alien (although the review may also be talking about navigating the menus).

The review also criticized the turn warning, claiming that its constant presence "gets really annoying". This turn warning refers to something that indicates the next player's turn.