Not to be confused with Freeze flames.

Accompaniment to Icebreaker: A Viking Voyage

Freeze Frame is a game released on June 18, 2013 to promote the upcoming release of Icebreaker: A Viking Voyage. The game allows the player to modify a selected image or a webcam image to make it appear as if the image was trapped in ice, like a Viking. The modified image can then be shared via email or saved to the device.

Although Freeze Frame is considered a game, it is unlike any other Nitrome game. Freeze Frame has its own icon, but it does not appear on the games page. The only place the icon could be found was on Nitrome's front page in the New Games section. This is also one of the rare games made by Nitrome that is not playable on Nitrome.com. Also, the Freeze Frame icon only appeared for one day.

In order to create an image, a viewer must first either browse for an image to modify from his/her computer or take a snapshot via his/her webcam. Both of these methods can be accessed by pressing their respective buttons. Once an image is inserted into the ice block shown on the left, the viewer can then modify his/her image using the controls presented on the website.

The glove that replaces the cursor when using Freeze Frame 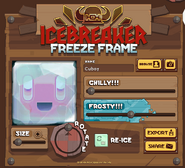 Retrieved from "https://nitrome.fandom.com/wiki/Freeze_Frame?oldid=207886"
Community content is available under CC-BY-SA unless otherwise noted.