The Games tab is a tab on Nitrome.com that has all the games in it. It is located on the navigation panel.

In Nitrome 1.2, the games tab consisted of a Game Boy with eyes on its screen. Next to that was the word "Games", which would change from white to pink when the player hovered their mouse over it.

In Nitrome 1.5, the games tab was an arch-shaped game controller (similar to an NES controller style to look like a SNES controller) with the same buttons on it as the last one.

It is likely based of the Nintendo Entertainment System controller. Once again, the the word "Games" was situated next to it, and it would turn from white to purple (or whatever the background colour was, depending on the skin) when the mouse was hovered over it.

The Nitrome 2.0 games tab was another game controller similar to the 1.5 one, except that it was larger and squarer. It has two red buttons on the right side, and a dark grey D-pad (directional pad (+)) on the left.

The controller is on a yellow (or what background the color was, depending on the skin), rectangle tab, and it had the word "Games" under it in bronze pop-out letters (the same print used on the Nitrome logo). When the mouse was hovered over it, the whole tab would make the appearance of being pressed down. The color of the tab could be black-purple, pink, bronze, yellow, blue, brown, light purple, red-pink, dark purple, dark green, or turquoise, etc., but the picture of the controller and the word "games" always stay the same.

When a new game is released, a small red speech bubble appears next to the games tab with the number one in it. If the player does not play that game, and another new game is released, the speech bubble will show a two. Then a three, and so forth until the player player the new games. Once the player goes and plays the unplayed games (or if they go to the browser page), the bubble will disappear.

However, when the demo of Flightless appeared on the games page, it caused a glitch. When the player clicked to play the game, it would take them to a special voting page that they could play the demo on. However, because of this, the red speech bubble would not go away since it did not register the special page as playing the game, despite the URL http://nitrome.com/games/flightless/ redirecting to the Steam Flightless page.

The first games tab appeared in Nitrome 1.2. It was found with the other tabs in the contents on the left side of the screen. When clicked on, the games page would come up.

On the games page, all the current games were listed, with an image of them to the left, and a small description of them to the right. By clicking on the image or the title, the player would go to the game page and be able to play the game.

The second games tab was very similar to the first. It is found in the same place on the contents, and would bring up the games page after being clicked on. The game page, however, was more different. Four other tabs on the game page separated the types of games: Hot Games, Main Games, Mini Games, and Multiplayer Games.

Clicking on any of the tabs would give a list of all the games in that category. In the case of Multiplayer Hot games, they could be found in the Multiplayer and Hot games tab and the other tabs that fit their description. Clicking on the games would again go to the Games page.

In Nitrome 2.0, the games tab was different from the first two versions. It was located in the contents on the top of the page, instead of the usual left side, and the buttons were bigger than the previous versions. Clicking the games tab would lead to the games page, which was more similar to the 1.2 version than the 1.5.

Each game was given a small, square 50x50 icon image of the game, with a description of the game to the right of it. Clicking on the icon or the description would have the player go to the gameplay page (excluding Icon games, which could be played on the games page). At the bottom of the games page were two arrows in which the player could click on to scroll through the pages of games, and in the middle were dots that the player could click on to skip ahead to a certain page (e.g., clicking on the third dot would take the player to the third page of games.)

The games were separated into four categories (except for during winter, in which a fifth category called "Winter games" was active): All games, Multiplayer, Hearted, and Picks. All games contained all the games in it, Multiplayer games showed all multiplayer games in it, Hearted games was supposed to have all games that the player had Hearted, but other games were there as well, and Picks had games that Nitrome had "picked" as good games.

In December of 2012, Nitrome updated their games page. The difference was that they added two new categories labeled "Touchy" and "Demos", and added small symbols next to Touchy games. The Touchy category had all the Touchy games in it, and Demos had all the demo games in it. Any games that could be played using Touchy had a small image of a Touchy controller in the top right corner of that game's box.

At some other time, Nitrome made the rows longer of games longer, changing it from two rows of eight games, to two rows of seventeen games. The player had to scroll down to see all the games on the page. 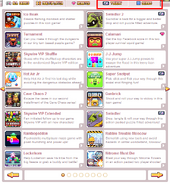 Retrieved from "https://nitrome.fandom.com/wiki/Games_tab?oldid=174901"
Community content is available under CC-BY-SA unless otherwise noted.