Keys can be redefined

Go Go UFO is a multiplayer racing game released in 2008. Players control aliens in mini UFOs racing each other around a track. The objective is to complete three laps as quickly as possible.

The default controls can be remapped just before starting a race.

Players control a mini UFO using three keys that steer and boost their character forward while racing around a track. To complete the race, a UFO must loop through the track three times. Up to four players can play on the same track simultaneously.

In single player mode (aka "1 Player: Time Trial"), players race around the track with a single UFO and the time they take to finish the race with counts towards the leaderboard.

In multiplayer mode (aka "2 Player", "3 Player" or "4 Player"), players race around the track until everyone but one player has finished. Players who complete the race first or second get a "1st" and "2nd" label above their UFO, respectively. If more than one player has not finished the race, players who have already finished the race are still able to move around the track, but the game will not recognize that they have completed more than three laps.

Two universal obstacles are present in the game: falling and meteors. If players fall off the track, they will immediately respawn at the nearest point they were to completing the track. Meteorites also periodically fall onto random parts of the track, and are signaled by a shadow a couple seconds before they land. If a UFO is right underneath a meteorite, it will squash the UFO and temporarily inhibit the player's control.

There are three tracks in Go Go UFO that can be played in any order. Upon selecting a track, players can then choose which mode they want to play in as well as rebind any controls.

Players can choose from the following courses: 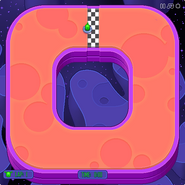 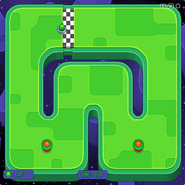 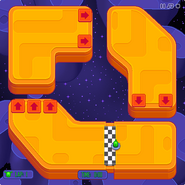 Space Hopper
Add a photo to this gallery

In single player time trial, players are scored on how long they take to complete the track. The leaderboard shows the first 100 players who have completed the track in the shortest amount of time.

Most of Go Go UFO's unused content comes in the form of unused text.

All of this text except the British Pound symbol is at the regular size of all other used text.

Hyphen
Add a photo to this gallery

Although green coloured text is used in the game, some of it in the game's files remains unused. These include:

The unused brackets are different than the ones seen in the (c) nitrome ltd 2008 (www.nitrome.com) image seen at the bottom of the menu.

Question mark
Add a photo to this gallery

Some images that are completely blank, but still have names. These names include:

Each track in Go Go UFO has two components in the files: a mask and a guide. Track masks have their image file named track_mask and are pink, with the exception of track mask 1, which is white. Each track guide has the word "track" and "guide" in their file names, with a number connecting the two words between two underscores, eg. track_2_guide. Track guides are all coloured white.

Retrieved from "https://nitrome.fandom.com/wiki/Go_Go_UFO?oldid=206277"
Community content is available under CC-BY-SA unless otherwise noted.