Nitrome Wiki
Register
Don't have an account?
Sign In
Advertisement
in: Articles with missing walkthroughs, Articles with incomplete sections, Green Ninja,
and 13 more

Fight your way free from being on the menu.

First game with the ability to skip a level since Ice Breaker: The Gathering

The player uses swipe controls to move the ninja in a particular direction. The ninja continues to move in that single direction until a block is hit. The player is unable to change the ninja's trajectory until the ninja stops moving.

The game is comprised of single screen levels, each with the goal of killing all enemies present.

Levels are presented on a green background map, with small houses representing the icons for each level. Unlocked stages appear white and change to red when touched. Beaten stages display cracks in their icon. Upon completing a level, the player is always returned to the level select screen. If they have passed the level for the first time, one or more levels will become playable.

Some areas of the map has two levels on the same vertical line allowing player to complete either one of them to move forward in the game. Additionally, players are able to skip some levels by watching a video advertisement.

Enemies are present in every level of Green Ninja. All must be defeated in order to progress. 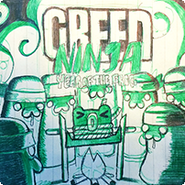 The small sketch of the menu posted on the Nitrome blog 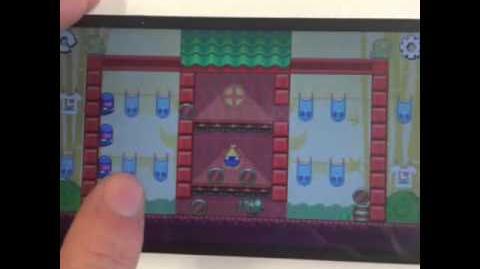 Released on June 10 2015 for iOS and Android, this version was the initial version of the game. It is labelled Version 1.0 on iOS. On the Amazon App Store, this release version is the same as Android update version 2.

This update was released on June 11 2015 and fixes auto rotation and other minor bug fixes. It is labelled Version 3.0.

Released on June 12 2015, this update fixes minor bugs and is labelled Version 4. This version of the game was used for the release version of the Amazon App Store version.

Green Ninja Year of the Frog was announced on January 4th 2015 with a projected release date of early 2015.[1] Jon Annal, the game's artist, pointed out that the background in the January 4 2015 preview image was a rough design and that a decision had not been reached on on what the background would be.[3]

The game was shown, along with Magic Touch Wizard for Hire and Silly Sausage in Meat Land, at the Pocket Gamer connect event that ran from January 13-14, 2015[4].

On February 12, 2015 Jon Annal mentioned that he was preparing to use his voice in the game.[5] Two screenshots of the game were shared on April 1st of 2015.[6] By May 1st, 2015 the entire game had been completed[7], with Nitrome just adjusting the game's levels, animations, sound, and interface, along with drawing the menu.[8] On the same day Nitrome and Jon Annal shared images of a sketch of part[9] of the game's menu[7][2] that had been drawn by Helm based off of art by Annal.[10][11] Helm would continue to help with the game the subsequent week while tweaking of the game was done by Jon Annal.[11]

The game Guardian Rock was used by Aaron Steed (the game's programmer) for research on Green Ninja's game mechanic[18]; Green Ninja was also influenced by both that game and Aaron Steed's personal game Flying Kick[19].

The the red and white poles seen in the January 4 2015 preview image were also meant to be interactive objects that prevented the player from moving horizontally, though this behaviour was eventually cut, the poles not animating well with the Green Ninja main character being one of the reasons behind this[20]. These poles still appear as scenery in a few levels of the game, present at the very edges of the screen.