For the character in the Balloon segments of Mega Mash, see Balloon (character).
For the pick up in Chick Flick, see Hot Air balloons (Chick Flick).

A plot for Hot Air is not introduced until Hot Air 2, when he falls in love with a female balloon, and eventually embarks on a second adventure to save her. He has made a few cameos in other Nitrome games, and currently has the made the most cameos of any Nitrome character (eleven in total), also appearing in a cameo in the Nitrome game released after the game called Hot Air - Sandman.

At the bottom of Hot Air is a small basket with his driver sitting in it. He has two ropes attaching the basket to him, and two ropes in the middle that control his movements. He has a round blue face with two white eyes, purple cheeks, and a red smiling mouth.

Again, a basket is at the bottom of Hot Air, except that there is a rim around the top of the basket. He has deeper, white eyes, and the middle two ropes are closer together. Instead of purple cheeks, he has pink ones. His mouth is closed, and a moustache is above it. As this game is set after the events of Hot Air 2, Hot Air is shown to be older.

The Balloon in Mega Mash is simply a balloon with a string that ties around its bottom and hangs below it. He has a pink mouth and two squares of purple for cheeks. He also has square, white eyes.

Hot Air once went through a very dangerous area. It had many hazards and many other creatures. It is unknown why he traversed the area.

In some point in time, Hot Air and a pink balloon fell in love and were together. While together, a flower fell out of the sky behind Hot Air. He went to pick it up, gesturing if she would want it, but accidentally knocked it over. While he was picking it up, Baron von Blimp swooped down, trapped the pink balloon in a cage, and took her away.

After their marriage, the couple bought a house (or built it) and eventually had a son. Their son was named Hot Air Jr. They also owned a pet dog named Squeak.

Hot Air is moved around with the cyan fan. While he is not blown around, he will slowly float down. His strings will stretch with the movement. It is possible to blow Hot Air very fast, depending on how fast the player moves the fan to Hot Air's head. Hot Air is weak to everything around him, the only thing that he is safe to touch being pads and smooth spikeless parts of walls.

If he touches anything not mentioned in the previous sentence, his balloon will pop and his gondola will fall off the screen. He constantly has the same expression on his face, it never changing. Hot Air's colour and expression can be changed in Hot Air 2, by changing his balloon.

Hot Air's driver is the person sitting in Hot Air in the Hot Air series. He is a small blue blob with white eyes and a mouth who resembles one of the passengers. He is usually blue, but depending on Hot Air's appearance he may be a different colour. He flies around in his balloon collecting stars and trying a variety of things.

In Hot Air 2, if the player manages to repeatedly kill Hot Air many times in a short length of time (like bring Hot Air into spikes located not far from the pad, restart the level, and do it again (repeating the procedure many times), soon, when his balloon pops, his gondola will float upwards, and the map screen music will be heard getting louder and louder.

In the Balloon levels of Mega Mash, a balloon appears as the main character of that section. This character appears as a blue balloon which looks exactly like Hot Air. This balloon is not Hot Air, but a balloon with a string attached to the bottom.

It is not known if this is Hot Air.

Hot Air appears in Nitrome Must Die. Although being the first Nitrome character in a Nitrome game, he ironically only appears in two levels in level set 91 - 100. Hot Air's Nitrome Must Die sprite appears a little different than his usual sprite from the Hot Air series. He attacks by slowly following the player and moving towards them. He has high health, and usually two Hot Air's appear at one time.

One level he appears in consist of several small platforms, and has an enemy population of almost all octopuses, save for the two Hot Air's which appear at the start of the level. The other level they appear in has a long platform and a swinging Wrecking Ball. The level has an enemy population of only Hot Air's which, are spawned out of two pipes located at the edges of the room.

In Hot Air Jr., Hot Air is only seen in the beginning intro with his wife. However, he is an unlockable balloon design for his son, and the player can change in to him by going to the dressing pad. No levels are needed to be complete to unlock the Hot Air design, because it is given to the player after watching (or skipping) the intro.

Hot Air has appeared in many of Nitrome's skins.

Hot Air has made many cameos in other Nitrome games.

Hot Air's balloon design can be changed in Hot Air 2, which depict a range of emotions. Custom designs could also be made in Hot Air Balloon Maker, but the game was later removed.

The number shown at the end of the description underneath each balloon is the number of the level the balloon was unlocked. PB underneath a picture stands for Primary Balloon. Click on images to see them clearer.

An old version of the Toothy smile balloon

Eye. 30
Add a photo to this gallery 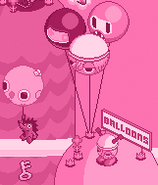 Hot Air in the Nitrome 2.0 skin

His driver in the startup

His driver in the game

The Hot Air Balloon being shot in the 100th Game skin 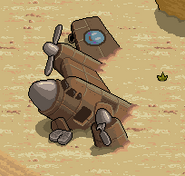 Hot Air's cameo in Tanked Up 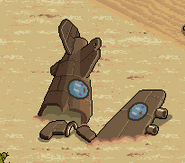 Another Hot Air cameo in Tanked Up

Hot air as he appears in the Party skin

The Hot Air Balloon in Classic

His driver, after the balloon being popped

The hot air balloon in the trial period section on Nitrome.com

Hot Air seen on a can in Pest Control

A shirt of Hot Air in the Shop

The Hot Air Balloon with a viking face in Icebreaker: A Viking Voyage, a cameo of Hot Air[2]
Add a photo to this gallery

Retrieved from "https://nitrome.fandom.com/wiki/Hot_Air_(character)?oldid=203750"
Community content is available under CC-BY-SA unless otherwise noted.