Sequel to our balloon blowing original. Bosses and surprises galore!

Hot Air 2: All Blown Up, simply known as Hot Air 2, is an action-puzzle game released in 2007, and also Nitrome's first released sequel. In the game, the main character, Hot Air, has a girlfriend and is trying to rescue her after she is captured by Baron von Blimp.

The game has several new enemies, as well as some enemies from its prequel, Hot Air, that have been redone or been given new counterparts. In the sequel, players were able make balloons using the Hot Air Balloon Maker, then use them as characters. When the balloon maker was taken down due to the humongous amount of balloons made, all player-created balloons were removed from the game.

The cyan fan is what propels Hot Air throughout the levels of the game. The player must click the left mouse button in order to activate the fan, which will immediately starting blowing Hot Air away from it. Also, the player must move the mouse in order to move the fan.

There are also extra levels, but these need to be unlocked by completing a certain amount of levels with all the stars.

Introduction: The Story So Far...

Hot Air and a pink balloon fall in love. Just then, a flower drops from the sky. Hot Air goes to pick it up, but knocks it over. Just then, Baron von Blimp captures Hot Air's girlfriend and flies off with her. Hot Air gets angry.

The player has to go into big mouth's mouth, and stay there until they can escape the other end and exit to the finish pad.

The player has to land on the key platforms to open gates, but has to get up before the spikes for the traps come up. There are two of these.

3: So I Married an Axe Murderer

4: King of the Castle

The player has to fan a wheel many times, and keep the gate up long enough so the player can get to the finish pad.

The player has to get out of the area they are in, and land on the key switch on the left. That key switch unlocks a gate, fly to the other key switch, and press it. That switch opens the last gate that blocked the exit. Now fly up to the exit before the green water gets to high.

The player has to fly up, activate the key switch, and fly up to the exit while the stone block is still down.

The player has to try to land on the exit that is flying around.

The player has to navigate through crumbling rocks to the finish, and avoid getting popped by drill bill.

The player has to go around the room and try to get away from the ball on the chain, then navigate to the finish by avoiding the double ball on chains, and the small spike diamonds.

The player has to land on orange pads to shoot a rocket at the Octoboss, and do this three times, then fly over to the exit.

The player has to fly past a giant ball and chain fast, to get to the exit.

The player has to wait for the water to go down, activate the bellow switch, then fly up to the area where the star is (not the area the player started in). Now activate the other key, then go up into the second alcove with a star. Now, go through the tunnel, and into the finish when the water dies down.

The player has to fly past some moving mines, then some others, then another, then up, then wait for the red pad to come down.

The player must navigate their way through moving dragon snakes, to the red pad.

The player must press four Key switches, while avoiding a giant bullet that follows them.

The player has to blow drills with parachutes into the baron, three times, then get out of the way, then press the key on top of the blimp passenger area, then go over to the finish pad.

A strategy to make the level easier is to just stay at the starting point where the balloon is and blow the drills into the baron.

The player has to land the balloon on all key platforms scattered in the level while avoiding the spikes from mines. After all keys are collected, the exit is unlocked.

The player has to get to the exit, but octopi are hovering in the stage. They have to be fanned away.

23: The Worm That Turned

In two rooms the player has to land on a key platform to reach the exit while avoiding blobs which are jumping up and down from the ceiling to the floor and back again.

The player have to get two keys in a room, whilst being followed by a bug.

The player have to make it to the exit, but to look out for the fans which are there to blow the balloon away.

The player has to fan the balloon to the exit, between blocks with enemies walking around it.

The balloon is trapped into a cage which is hanging on a cable. The cage moves by itself and the player has to move with it to finally land on the exit.

The player has to fan the balloon through three mouths, before they close.

The player has to fly over a wall and land on the exit, while avoiding bouncing smileys.

The player has to land three times on the finish pad which is located on top of Big Daddy's head.

The Hot Air 2 preview.
Add a photo to this gallery

In February of 2007, Nitrome released an advertisement on their site that linked to a whole page about the upcoming game. The page's background was similar to the game's title screen, and it included four screenshots from the game. Beneath the game title it listed the new, upcoming features for the game, such as: "New boss fights", "Scrolling levels", "Unlock new balloons", "New map screen" and "And more".

The player could click on the screenshots to enlarge them, and then scroll through them. Beneath the screenshots were captions that had comments that Nitrome made about the game, such as "Screenshots (1/4) - Be careful around some of the new types of traps that await you in the game!" 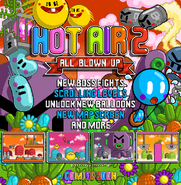 Screenshot 1/4
Add a photo to this gallery

A trailer was also posted on July 4, 2007, showing excerpts of the levels and some of the other features in Hot Air 2.

These are the preview images released on unknown dates, presumably sometimes during 2007.

Another level screenshot preview
Add a photo to this gallery

When Mat was reviewed by Free Games News about Hot Air 2[2] being released in February 2007, an image of a beta room from the game was used. The only difference in the picture is the background and coloured blocks - instead of the blocks being coloured grey, they are coloured green.

The beta image
Add a photo to this gallery

Retrieved from "https://nitrome.fandom.com/wiki/Hot_Air_2?oldid=203890"
Community content is available under CC-BY-SA unless otherwise noted.