Hot Air Jr. is an adventure game released on June 28, 2012. It was first hinted in a .gif of an enemy from the new sequel on the Nitrome blog on March 3, 2012. Gameplay from Hot Air is retained, with the player using a fan to control Hot Air Jr around the stage while avoiding enemies and hazards. Hot Air Jr. is also the second Nitrome game to have a demo. The full version of this game was made a distributable game on February 13th, 2013.

Hot Air Jr. consists of 17 levels, 12 which can be accessed once the previous level is completed, 4 secret levels that have to be unlocked via the collection of all stars in levels, and a level accessed by going into Squeak's dog house. Level are divided into 4 rooms, and for the first time in the hot Air Series, the player has to traverse a house where the levels are doors, the house acting as the HUB of the game.

This is the first room the player gains access to at the start of the game. When the player starts, a locked gate is blocking the right exit of the room. A Key is necessary to open it, which is obtained by following the level doors all the way to the seventh level.

The bottom level of the house is safe, while the upper hallway is lined with spikes on most of the ceiling and floor. Where level 7 is is where the key can be found, and once brought to the door, allows the player to access outside. Even once the player has opened the gate, even when they leave reload the game (such as when the click their browser's back button or close their browser, then go back to the Hot Air Jr game) they will start back in the bottom room, and may (but not all the time) have to go retrieve the key.

On the far left of the room are stairs, which lead to the changing room.

Enemy: Boot
Rooms: 1
The player has to wait for the Boot to jump high up, off the screen, then they can pass underneath it.

Enemy: Large fan
Rooms: 2
This level has two rooms, both which have large spinning fans. The player has to go up, horizontally left, then down to get to the entrance of the second room. Located on the top left is the first fan. The second room contains a restart pad. To get to the finish pad in this room, the player has to travel horizontally right until they reach the diagonal patch of spikes.

When there, they have to travel upwards until they get to to the ceiling, then horizontally left to the end of the middle spiky segment extending out of the wall. The portion where the player has to move upwards is where the second large fan in the level is found. This enemy can be avoided by going around it.

Enemy: Swords
Rooms: 1
This long level involves having to go past swords found in the floor and ceiling of parts of the level. The first section can be easily traversed if the player holds the fan to Hot Air Jr's head and goes past the spikes without stopping, until coming to the mini swords.

For traversing these ones, the player should wait until each pair of swords retract out, then while retracting back in, go through the gap that appears. This should be repeated for each sword in set 3 until the player reaches the end.

In this level, Hot Air Jr. is faced with a spike maze. There is also a pink spike block that follows Hot Air Jr. around the level, and homes in on him every few seconds.

When the player starts, go up for a bonus star, then go under the homing enemy. Go all the way to the left and go up. Continue and turn right for the two stars. Follow the maze of Spikes when they gather around Jr, soon, Jr. will find himself at the finish platform.

This is the upper hallway/second floor of the house. It can be accessed without having to have finished any of the levels on the first floor, but that means none of the levels on the second floor can be played. The upper hallway/second floor is lined with spikes on most of the ceiling and floor. This is where the Key for the locked gate on the first floor can be found, it is located to the right of level 7. Once the Key is brought to the locked gate, the player can access the outside/backyard.

Enemy: Axes Rooms: 3
This is the first level where Axes, locked gates, and keys are introduced. In this level Hot Air Jr. has to navigate through two rather tall shafts, while dodging swinging Axes. The player is started off at the very bottom of the first shaft. To progress, a locked gate to the right of the player has to be opened. In order to do so, Hot Air Jr. will need to be blown to the very top of the room, where the player will encounter their first swinging Axe enemy. This is also the largest Axe encountered in the game, despite being the first. It only swings left to right very slowly, in an arc motion. If avoided, the player will find a key perched atop the block the Axe is swinging on. The first Star in Level 5 can also be found just above the key. Once the key is grabbed, Hot Air Jr. will need to be brought back to the locked gate to open it. Unlike the first two Hot Air games, keys stay with the player until they are brought to their corresponding locked gate. Keys will also weigh Hot Air Jr. down, making him much heavier and causing upward movement much more difficult.

The next room greets you with a Checkpoint, and needs to be traversed similarly to the first one. This time there are two smaller Axe enemies instead of one large Axe. These two will swing side to side, just like the first, but noticeably faster. After five swings they will spin around in a large circular motion, which can be tricky to avoid in some instances. The second Star can be located just above the first small Axe, while the second key can be found above the second small Axe. To the top right of the first small Axe the player can find the third Star in the level, tucked away in a small horizontal passage. The fourth star can be found above the second small Axe. The fifth and last Star in the level is located in a similar passage to the third Star, to the left of the second key. Once that key is safely brought back to the second locked gate at bottom of the room, Hot Air Jr. will find the checkerboard goal platform, thus concluding the level and unlocking the Ninja Balloon skin/outfit.

Outside/the Backyard is unlocked once the player retrieves the key from the right of level 7's door. When Outside/ in the Backyard, a few spike blocks are found, and a roaming purple bat. This room has a semi-secret level, the dog house. At first nothing pops up to indicate it is a level, but when landing on the base of the house, the level is entered. Levels 10-12 are on individual platforms that are placed high up. The top left of the room leads to the upper room. Getting to the upper levels means avoiding the spikes and the purple bat.

Dog house is not given a numerical level number, only referred to as "Dog house". At first, in the room the level is accessed, nothing pops up to indicate it is a level. Only when the player lands on the base of the dog house it is entered.

Level 12 has the only and first boss in the game. There are two outcomes in the level, both outcomes that give different endings. (please note that, although both videos are walkthroughs that show how to kill the boss, any of the walkthroughs that show how to plummet the boss to the ground and cause him to surrender can be used to complete the level)

The upper room has 3 spike crusher blocks, and between each crusher block a door that leads to a level. Each level in this room is unlocked once the player has gained enough star tokens (a star token is obtained when all the stars in a level is collected). At the edge of this room is wall, which on the opposite side has the door for level 16.

This section is empty. You can help Nitrome Wiki by adding info. Star tokens needed: 2

This section is empty. You can help Nitrome Wiki by adding info.Star tokens needed: 6

This section is empty. You can help Nitrome Wiki by adding info.Star tokens needed: 12

This room is accessed from the room the changing room is found in. To get to it, the player has to blow the balloon through the bottom part of the wall placed on the right.

Go left from the costume door. Although it looks although the wall is impassible, part of the wall is not solid - go through the non-solid part. Watch out for spikes while going through the hazardous area, and make sure that sixteen mustache stars have been collected before accessing level sixteen.

This level includes hand, which tries to annoy player by grabbing fan. The player can stun it for while by shaking mouse to left and right.

Nitrome revealed a .gif of a bug-like enemy that is to appear in an upcoming sequel. Fans were directed to tell Nitrome in the comments on Facebook and Twitter what they thought the sequel was. After the release, the preview image was revealed to be a floating pear.

Nitrome revealed their "cryptic sequel" to be Hot Air Jr, and provided an screenshot. The screenshot never actually appeared in the game.

Nitrome revealed the official name of the game, Hot Air Jr. Nitrome said also that it will be easier than Hot Air and Hot Air 2. They provided another screenshot of the game which turned out to be a beta image.

Nitrome released a demo for the game on their site. This was Nitrome's second demo.

The only known beta elements are a few of the preview images provided by nitrome. The March 13th image (2nd preview image) showed Jr. in a room with three floating pears. It is likely this image was only to show what the art would look like, and not an actual room, as the room had an unusual setup consisting of a yellow block and a breakable block.

The second and last beta image is the March 22nd preview image (3rd preview image). The image shows level 15 of Hot Air Jr., but with a different background and different coloured blocks. The section shown is the second diagonal hallway. 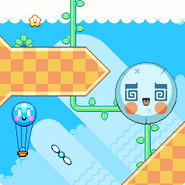 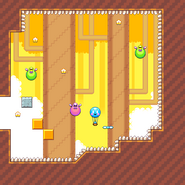 First beta image.
Add a photo to this gallery

The glitch
Add a photo to this gallery

Retrieved from "https://nitrome.fandom.com/wiki/Hot_Air_Jr?oldid=206395"
Community content is available under CC-BY-SA unless otherwise noted.