Nitrome Wiki
Register
Don't have an account?
Sign In
Advertisement
in: Articles with missing walkthroughs, Articles with incomplete sections, Articles lacking a necessary video,
and 14 more

In the Dog House

In the Dog House

Slide the rooms into place and guide the dog to find his dinner.

In the Dog House, also known as Dog House, is a puzzle game released on September 18th, 2008[1] as a browser game, and on June 7, 2018 on the App Store and Google Play. The player must guide a dog to the bone by moving the pieces of the house.

The player does this by placing a bone in places in the house where the dog can get it. It is almost similar to a sliding number puzzle game, of which the player slides the pieces of the house to help make a pathway for the dog to the kitchen using its bone.

"Drag the rooms to form a path from left to right. Then pick up the bone and put it on the other side!"

First, drag the bone to the kitchen. Move the room with the anywhere wallpaper to the right of the left and right only room. The player has completed level 1.

"You don't need a complete path from start to finish. Get the puppy as far as to the sofa, and then make the path to the kitchen."

"Complete the set of stairs to reach the kitchen. Some turn and others slide."

"Beware of the cat! He will try to get near you and block your path. If you get stuck, press the reset button in the corner of the screen."

"To use the doors, get the puppy to the first door, put the bone by the second door, and the puppy will walk through."

"Connect the power box to the gate with the cable, and the gate will open!"

Players are scored by the number of moves they take to complete each level (the less moves, the more points are earned). 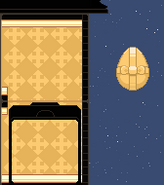 The avatar egg appearing in the wrong place

On June 6, 2018, Nitrome released a remake of In the Dog House on the App Store for $2.99 and Google Play for $3.99. The game features fifty levels, including the majority of the original forty with additional levels. It also features six unlockable dogs and six unlockable toys, which replace the dog and bone from the browser version when selected on the title screen. One of the unlockable dogs is a cameo of the guard dog featured in Slime Pizza.

The mobile port also contains three new backgrounds and a new type of tile that weighs itself down.

Levels present in the browser version

Just drag the bone to the kitchen and the level will be completed.

The menu of the mobile version

Content in this section is not used at all in the game.

Present in the game's files are unused images of a plus sign (+) and a question mark (?). Although these seem as though they are the only unused text, there is actually a lot more that do not have images but Action Script associated with them.

The Action Script for the unused text that have no image appear all the same, with the exception that the word occurrence after None_ but before extends is replaced with, in all caps, the name of the symbol.

Below are collapsible boxes that contain the source, raw, and P code for all unused symbols. Click [show] to collapse the box.

A brown box is present in the game, a box that has a brown outline and transparent inside. It is possibly early dimensions for the general size of each room in In the Dog House.

Found on Simon Hunter's website is a large image of various backgrounds for rooms in Dog House, including some backgrounds that go unused in the final game.

Content in this section had their sprite superseded by another sprite.

Present in the game are very early images of the general shape of rooms and how the cursor would react to being on that room. Notably, the cursor on the image has been drawn on to the image, instead of being an alternate image. Along with this, there are beta images of the cursor.

Rooms appear light blue in colour, with the cursor on them appearing dark blue. The regular level cursor that is not on any room appears light blue.

A room that cannot be moved

A room that can be moved horizontally

A room that can be flipped

A room that be moved vertically

A room that can be moved in any direction

A long room that can be moved in any direction

A long room that can be flipped

A very long room that can be moved in any direction 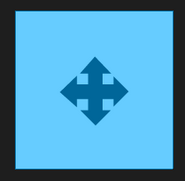 A big room that can be moved in any direction 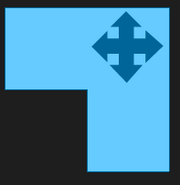 A ¬ shaped room that can be moved in any direction

A tall room that can be moved in any direction

A cursor. This cursor is an SVG in the game, while all other images are PNG

A sideways cursor, possibly used for scrolling the screen. Like the previous cursor, this cursor is a SVG in the game, while all other images are PNG