Objects in Silly Sausage that interact with the stretchy dog but do not harm it are known as interactive objects. Some, such as blocks and gems, appear in every level while pipes and switches are significant in the fact that they only appear in select levels.

Blocks make up the main areas of the game. Most can be grabbed onto, and each of them interact differently with the stretchy dog.

Tan blocks appear more frequently in the earlier levels of Silly Sausage. The stretchy dog is able to grab on and move to these surfaces.

After all gems in a level have been obtained, the goal blocks will light up to show that the player can now complete the level. In many cases, the stretchy dog will start on the goal blocks, and players must go through all obstacles the same way they came once all gems have been collected.

Red and blue blocks first appear in level 6, the same level as switches are introduced. The blocks usually block areas of the game that have to be unlocked with the switch. When one colour of blocks is invisible, the other will be solid.

Halfway through the game, on level 15, cloud blocks are brought into the game. Like most blocks, the stretchy dog can grab onto them. Once leaving the cloud block, however, it will disappear. Since they can only be grabbed onto once, players need to think the stretchy dog's moves in advance or they may end up being stuck on a particular level.

As they are compulsory for the completion of a level, gems appear in all levels of Silly Sausage. Each gem has a five-sided ruby shape and gives off a glint in the background while bobbing in the air. Although they come in different colours, each gem is worth the same value of twenty points. Once all gems in a level are obtained by the stretchy dog, the finish line will light up, indicating that the level can now be completed by reaching it.

First introduced in level 4, pipes are interactive objects helping the stretchy dog reach other areas of a level, some which are otherwise not accessible. When the stretchy dog travels into one end of the pipe, it will be seen coming out of the other end briefly after entering.

The stretchy dog will leave the pipe once it grabs on to another surface or the player lets go of arrow key used to send it into the pipe. Like blocks, the side surfaces of pipes can also be grabbed onto by the dog. In later levels, pipes provide an alternative route to reaching gems and do not necessarily have to be travelled through in order to complete a level.

Switches first appear in level 6, allowing the player to control which colour blocks are visible at a time. To activate a switch, the stretchy dog has to grab and move itself onto the switch. A light in the middle indicates which colour of blocks is invisible. This allows the stretchy dog to reach areas that would otherwise be barricaded by blocks of a certain colour.

A switch between two metal blocks 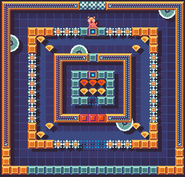 A switch with blue in the middle indicates that blue blocks are invisible.