A menu shows the list of options the player may wish to select after a game's startup has been played. From there, players may select one of the choices available on the screen in order to play the game, find information about it or sometimes to set up or change the options.

While most Nitrome games go straight to the menu after the startup, some games, such as Super Treadmill and Roly Poly have a "Click to start" option that the player must click before proceeding to the actual menu. Usually, special animations allow a smooth transition from one option to the other and may even relate to the game's theme. For instance, when a player selects options in the menu when playing Rockitty, an image of a fish will transition the player to the screen for that option. In NES games, a special noise may play when the player selects a certain option.

Up until the release of Skywire VIP - Extended, game menus had the basic layout of the game name at the top, followed by the options presented in text (such as "Play", "Help", "Scores", etc.). This layout of options was used up until the release of Swindler in 2012, where all the buttons were reduced to icons that lined the bottom of the screen (a triangle pointing right for "Play", a trophy for "Hi-scores", a star for "Credits" and a question mark for "Help").

These are some of the components that show up on a game's menu after the startup or startup screen, if applicable.

All games will have a "Play" or "Play Game" option that will allow the player to start the game after this option is selected. It is typically placed at the top of the screen, as most players would want to go straight into the game. Players are then most times taken to a level select screen where they can choose the game they want to play. Since the release of Swindler and onward, the Play button was replaced with an icon of a triangular arrow pointing right. This icon is usually the largest on the menu.

The "Help" option can be selected by players to get basic information on how to play the game. Information is often often also supplied to the players as they play and progress through the levels. This button is also accessible within levels for certain games.

Clicking the "Scores" option will bring up a list of the top 100 high scores submitted in the game. They do not necessarily display the highest scores, but rather the highest value submitted to the database.

These are all the people who helped to make this game!
- Poly, in Roly Poly's credits menu

The "Credits" option shows a list of Nitrome staff involved with the game's development, such as artwork, programming, beta testers (in older games) and music. This list is short in most of the games, excluding Icebreaker: A Viking Voyage, Gunbrick (mobile) and the mobile port of In the Dog House, where there's a scrolling list showing the credits.

This component appears only in Silly Sausage. It leads to a screen where a password can be entered to apply certain conditions that affect all levels in the game.

Some menus have components related to gameplay that players could interact with before playing the game. For instance: 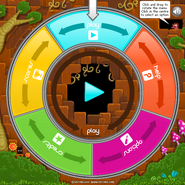 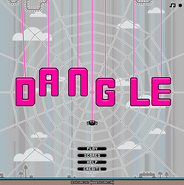 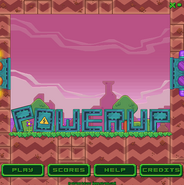 The letters in Power Up can be rearranged to create a circuit between the robot heads. 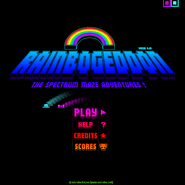 Retrieved from "https://nitrome.fandom.com/wiki/Menu?oldid=205615"
Community content is available under CC-BY-SA unless otherwise noted.