The Moon[2] is the main character in the games Cheese Dreams and New Moon.

The Moon is yellow, and made of cheese. It has freckles, white eyes, and small buckteeth; it appears to be frowning. The Moon is seen to sleep during the night, watching over earth.

In the Cheese Dreams series, the moon was swallowed up by the S. S. Squeakstar. Because of the low gravity in the ship, the moon bounced around.

The Moon bounces while in the mouse ship. It can bounce rather high, and has the ability to bounce over space mice. The moon is heavy enough to push switches down, and can only touch hazards or enemies three times before it falls apart and dies. Melted cheese will instantly kill it.

The Moon fires green bullets out of its mouth, rotating around to always face the player. The weak point of the boss is the Parasite, which the Moon tries to keep away from the player by adjusting to the player's movements.
After the boss' health bar reaches 2/3rds, the moon will become crazy for a moment, spinning around out of control and firing waves of bullets at a fast pace. After this special attack is over, the boss will settle down and go back to its usual routine of rotating to fire at the player.
When its health reaches 1/3rd, the Moon will perform his special attack once more, after which the boss will start moving towards the player, leaving the center of the room. When its health is entirely depleted, the boss will explode.

While the Moon was sleeping somewhere above Earth, the S. S. Squeakstar came to swallow the Moon. The Moon found himself in a cell bouncing around inside the ship that looked bigger than it did on the outside. He realized that he was captured for cheese. He eventually found other planets were captured in the ship for the same thing and led them to escape.

He got to the core reactor to find out that the Sun was captured to power the ship.

Same with Cheese Dreams, the Moon bounces in the ship but this time he can defeat the space mice by bouncing on their heads, not at the sides of the mouse, to break their helmet and jumping on them again to kill them.

When the Moon is harmed, stars are seen going around his head. As the stars disappear, the Moon gains more health until reaching full health again. Touching any hazard two times consecutively will result in death. Melted cheese results in instant death upon contact. 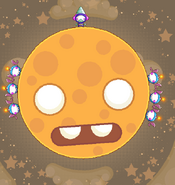 The moon in Chisel 2 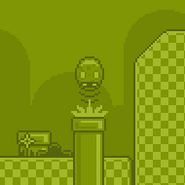 The Moon in the Retro skin 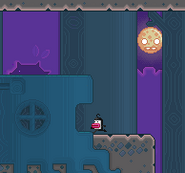 The cameo in Small Fry
Add a photo to this gallery

The Moon grinning after a level is completed

An avatar of the Moon

The Moon in the icon of Cheese Dreams Demo

The Moon in the icon of Cheese Dreams

The Moon in the icon of Cheese Dreams: New Moon 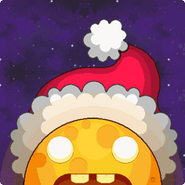 The Moon wearing a Santa Hat in a blog post 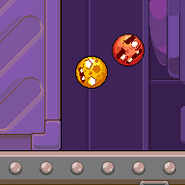 The Moon compared to Mars 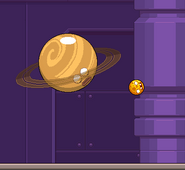 The Moon compared to Saturn 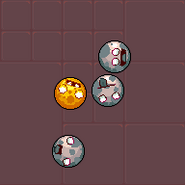 The Moon compared to the three Lost moons

The Moon compared to Mercury 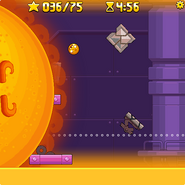 The Moon compared to the Sun 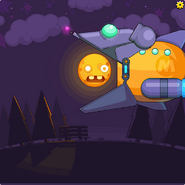 The Moon compared to the S. S. Squeakstar (outside) 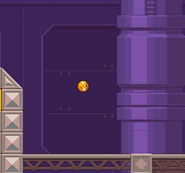 The Moon compared to the S. S. Squeakstar (inside)

The Moon next to Saturn, Mercury, Mars and the Lost moons
Add a photo to this gallery

Retrieved from "https://nitrome.fandom.com/wiki/Moon?oldid=208055"
Community content is available under CC-BY-SA unless otherwise noted.