Three eggs dropped into its mouth

Incomplete section. You can help by adding missing info.
The Mountain Troll appears as a giant rock sticking out of the water, this rock appearing similar to an Icebreaker A Viking Voyage Troll. This rock has a giant ear on the far left of the rock, to the right of this rock being two eyes; the left eye being more visible than the right.

Between both eyes is a giant nose; under the bottom end of the nose is the upper lip of the troll, a bit low below this mouth being the Mountain Troll's lower lip, which is attached to its enormous chin. Sticking up the lips are teeth. The Mountain Troll is apparently very old, and possible at one point submerged, due to the moss on its face and the considerable amount of moss on its head.

Placed on the head of the Mountain Troll is the Drakkar of the level.

The largest type of troll that ever roamed the Viking lands... folk says they were as big as mountains (hence the name we guess!)

As much as it would be impressive to see one, I’m glad they’re no longer around to get in the Icebreakers way. Yep definitely not in this game... definitely! 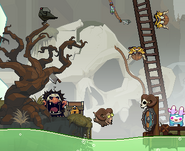 The Mountain Troll as seen in the Teaser Trailer: Icebreaker A Viking Voyage at fifty nine seconds

The Mountain Troll's skull as seen on the characters section of the Ice Breaker iOS website
Add a photo to this gallery
Retrieved from "https://nitrome.fandom.com/wiki/Mountain_Troll?oldid=203742"
Community content is available under CC-BY-SA unless otherwise noted.