The NES is a skin released January 24th 2011 on Nitrome.com to coincide with the release of its second NES game, The Bucket. The skin has several screenshots of previously and yet to be released Nitrome Enjoyment System games, including some images of NES related content. It is unknown if all the games shown will be released in flash, but seems likely that they will be, particularly the ones bearing a resemblance to other games such as Balloon, Ninja and Shoot.

The skin has fifteen tiles, each one displaying an NES game or the general system and its features. The tiles are, in order, from left to right and top to bottom, Ninja, Pop Bros, Fighting Game, Shoot, Nitrometris, 3D Game, The Bucket, Super Treadmill, NES Sky Serpents, Cuboy Game, Balloon, Medieval RPG Game, and Maths. The list of the articles for each individual tile is located below. 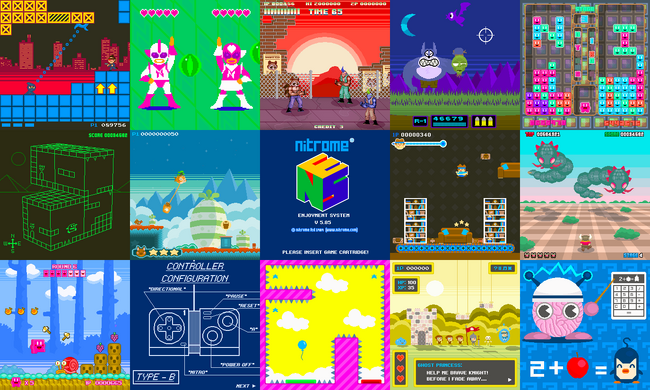 It was believed that all the NES games on the skin were going to be released as NES games. In March, Nitrome previewed an image of a game involving knights and traps. The name was revealed to be Knight Trap, which had characters and enemies that had been shown in an image on the NES skin. The characters and image on the NES Skin was later believed to be a foreshadowing of Knight Trap.

In March, Mat Annal posted a video of a tech demo, demonstrating a mechanic they were going to implement into a future game. The video had commentary with Mat Annal and Luis Romero, Mat who had said that the 3D game in the NES Skin - drawn in wireframe graphics - was actually an image of a main game that Nitrome was making. He also said that the image was inserted into the skin as a tongue-and-cheek joke. This later developed into the game Flat Pack six years later.

Although the NES skin does not include any screenshots of presumably actual games, it included screenshots that featured characters, enemies, and (sometimes) elements from an upcoming game in a setting that never appeared in the actual game.

On December 17th and 20th 2014, Nitrome hid two avatar gifts in the NES skin, obtainable only by those who had a Nitrome account. Clicking the gift grants the viewer an avatar.

Retrieved from "https://nitrome.fandom.com/wiki/NES_(skin)?oldid=204786"
Community content is available under CC-BY-SA unless otherwise noted.