The skin contains a bridge, where the Cactus Men can be seen in their Handcart Truck, near the Mecha Saur from Rubble Trouble Tokyo near the Demolition Crew (more exactly Barry, 2 Larrys, Garry and the Boss) from the Rubble Trouble Series relocating a part of the bridge with the helicopter using Grabber. In a part of the bridge is a race, where the bearded man, Guard Dog, a small legged blob, Turner, the princess, King Frog and a Henchmen (maybe Enemy 585) appear in Karts. They Karts have just 4 wheels and a steering-wheel, while others lack a steering-wheel. Turner doesn't have a steering wheel, and some Karts have a steering Wheel but it is hard to see.

On one hill, the raccoon (Fighting Game version) is sitting down playing on an NES with the Turbo Controller . The sea has islands which have buildings, One is "Nitrome Towers", which has a giant parasite climbing it with Princess Nectarine in one tentacle. On the other island is a tower with a knight from Knight Trap and enemies from Knight Trap, with the Knight attempting to scale the tower. Another building has Sleepwalkers who are waling out of a Portal; on top of the building is a chick from Chick Flick.

On another island is a giant venus fly trap (Super Feed Me version) escaping Plume by breaking the glass. A nearby hill has leeches from Super Feed Me in a desert zone. In between the two hills is a pipe, and a previously unidentified character (revealed to be swindler) hangs from it. Next to Plume are two ships, one ship with the pirate flag on the right that holds two squirrels from Chick Flick, and the one on the left which have pirates from Mutiny.

In on the Bridge is many cars made to look like other Nitrome Characters. One car has the Monkey on the back, who is infested with Beetles. Many buildings are seen around the area, two buildings that looks like Magneboy and one what looks like a Henchmen. A lot of characters appear as trucks. For example, Chiseler and Zapo. A hill looks like repaired by the Chiseler after it was destroyed. This is a reference to the ending of Chisel 2 game. 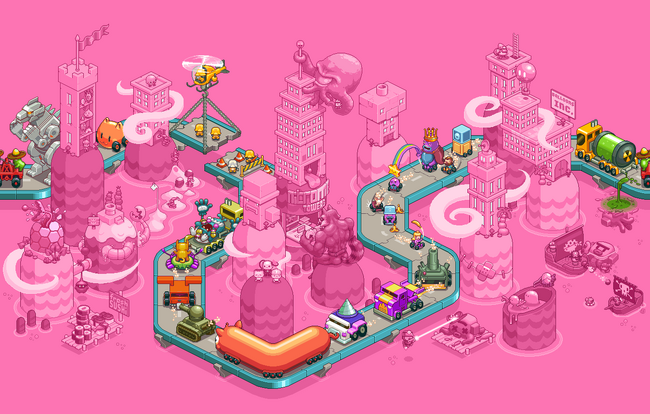 On April 19 2014, Nitrome hid an avatar gift in the Nitrome 2.0 skin, obtainable only by those who had a Nitrome account. Clicking the gift grants the viewer an avatar.

Retrieved from "https://nitrome.fandom.com/wiki/Nitrome_2.0_(skin)?oldid=207994"
Community content is available under CC-BY-SA unless otherwise noted.