Nitrome Towers is also the place where Nitrome Must Die takes place. This building also cameos in Oodlegobs. 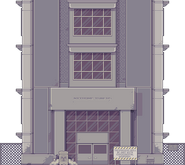 Ground level
Add a photo to this gallery

Nitrome Towers is seen in the Trailer of the game, and has a much different appearance than its skin appearances. Nitrome Towers in Nitrome Must die is shown as having 100 floors, each floor being the same height and having the same amount of windows, even though varying in size.

At the bottom there is a sign and some garbage cans, as well as other paces of metal. A giant sign that reads "Nitrome Towers" is seen on the top of the building, being well protected as a laser gun will destroy anything that lands on the top of it.

In Nitrome Must Die, Austin Carter and Justin Bennet attacked the building. They killed all who got in their way, as well as used the company's experimental weaponry. Whatever the company threw at them, the two friends destroyed. They rode to the next floor via elevator, and after scaling 100 floors, the made it to the room of the Nitrome Boss.

Nitrome Towers next to MewTube
Add a photo to this gallery

Retrieved from "https://nitrome.fandom.com/wiki/Nitrome_Towers_(NMD)?oldid=200440"
Community content is available under CC-BY-SA unless otherwise noted.