The nose is a character in the Snot Put series, the first boss in the game Nitrome Must Die and an enemy in the game Hot Air Jr.

The nose appears in Snot Put to be made of skin-coloured metal, and is seen attached to the side of a mountain.

The nose appears with a similar appearance as Nitrome Must Die's nose, but on a more greenish colour scale.

The nose appears similar to its Snot Put appearance, only more up to date.

The nose appears exactly as it appeared in Super Snot Put.

When the player starts the level, the snot will drop out of the nose, holding on to it a bit. The player can then take the Snot and hurl it. The nose really doesn't serve any purpose other than to hold the snot.

When the player starts the level the snot will come out of the nose and if the snot is already out some more snot comes out. The nose will also be seen on signs in various locations of Super Snot Put.

Shooting snots out of its nostril

Moving vertically up the wall

The nose makes an appearance as the first boss of the game Nitrome Must Die.

The nose will move vertically up the wall, firing snot out of its nostril. It will first fire snot slowly in a circular pattern.

When the nose becomes noticeably damaged (as seen on the first picture below) it will fire snot (barely noticeably) faster.

When the nose starts getting critically damaged (when green mucus is seen) it will not only fire faster but reload faster as well and fire directly at the player.

To kill the boss, the player has to fire at the nose, this being easy as the Snot do not serve to be that dangerous with no shields or immune parts. As the nose's health gets down lower, the metal on its nose will begin to fall off, revealing its gooey green insides.

When hit, small metal pieces will come of it and it will "bleed" green mucus. The easiest way to destroy the Nose in Nitrome Must Die is to use the boomerang or 'out of ammo' weapon on it.

The nose will fire snot, either the fast, long ones or the short, slow ones. It is advised that the player destroys them quickly, as too many of them can be a threat. They are weak, and thus they can be defeated easily. 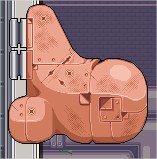 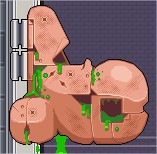 The nose more damaged
Add a photo to this gallery

The nose is found at the very top of level four in Hot Air Jr. Like in a few past games, it plays a minor role. In Hot Air Jr, it only serves as a place to sneeze the snot out. What it will do is when the snot is in the nose, the nose will move up and going down quickly, pushing the snot out. It holds the snot until it comes back, where it proceeds to do the same action again.

Retrieved from "https://nitrome.fandom.com/wiki/Nose?oldid=200797"
Community content is available under CC-BY-SA unless otherwise noted.