One heart (Parasite), one hundred (NMD)

The Parasite[2] is the main character and the protaganist-villain in the game Parasite, and a semi-boss in Nitrome Must Die, in which it takes over the giant moon from the Cheese Dreams series.

The Parasite is a small, brown cephalopod with one green eye. It has many small tentacles for a mouth, and two larger tentacles that it uses for walking. Its blood is green.

Sometime in the past, the Parasite attended the Academy of Evil (likely in order to become evil or increase in evilness), but did not take the swimming lessons which were available there.

The Parasite had a run-in with the space bees at some point, barely escaping their hive planet and becoming a mortal enemy of theirs.

The Parasite flew down onto the green planet with the aim of draining the planet of the energy of its big forest spirits.

The Parasite walks at a medium pace, but can jump rather high. Independently, the Parasite is very weak, exploding on contact with any hazards.

Its main ability is to enslave animals by jumping on their heads and inserting its tentacles into their brain. Enslaved creatures are characterised by their green eyes, drool, and blood (similar to that of the Parasite itself). All creatures have their own health values and abilities, which the Parasite can exploit in its mission. Pressing

while on an enemy will kill it and cause the Parasite to leap off it.

As the Parasite requires access to a creature's brain to control it, creatures with their brains shielded from attack, such as with shells, cannot be controlled. Elite winged cats, snails, and beetles are examples of creatures who cannot be enslaved, and as such must be avoided or killed instead. The Parasite is also able to control the acorns shot from the Out-of-Order cannons.

When not possessing a creature, the action button (

) causes the Parasite to pass gas. While idle, it will use one of its tentacles to lick around its mouth.

The Parasite appears in Nitrome Must Die on level 20, appearing as the boss for that level. The parasite has enslaved the moon and uses it to try to kill Austin Carter and Justin Bennet. The Parasite serves as the weak point of the moon, having to be shot to damage the moon. The Parasite will try to move the moon around as to try to not get himself near Austin or Justin.

Nitrome 2.0
Add a photo to this gallery 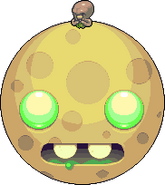 The Parasite on the moon in Nitrome Must Die 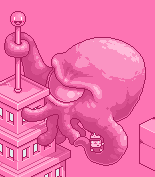 The Parasite as he appears in the Nitrome 2.0 skin

The Parasite as he appears in the snowman skin

The Parasite enslaving a squirrel

The Parasite infecting
Add a photo to this gallery

Retrieved from "https://nitrome.fandom.com/wiki/Parasite_(character)?oldid=206777"
Community content is available under CC-BY-SA unless otherwise noted.