Platform game heroes through the ages have been abducted!

Platform Panic is an endless platform game released on iOS, Android, and browser on December 17, 2014 with an Amazon App Store release on January 29, 2015. The player controls a character navigating through an infinite platform stage.

A major update to the game that would give each character a special ability was released on January 28, 2015, with a second update released on May 14 2015[1] that introduced new backgrounds and traps to the game.[2]

Platform Panic is a platforming game where the player navigates their player character through an infinite platforming stage. The player is scored based on how many rooms they clear. Each room has an exit that leads to another room, though some have two exits instead of one. Most rooms have coins in them that can be collected and spent to unlock other characters.

A break from previous Nitrome endless games, in Platform Panic every time the player dies they are given the chance to retain their score and try the room again either by paying a certain amount of coins to watch an advertisement (the amount of coins varies, ranging from 5-29) or buying a continue for a certain amount of coins. The starting price is fifteen coins, though it doubles for every subsequent restart again after previously using a restart during the same game.

Player can unlock various characters to play with by unlocking them with coins found during while playing. 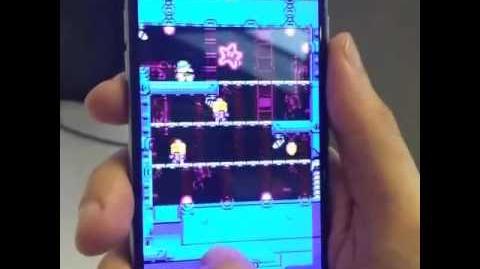 This version is labelled 1.0.8 and fixed some bugs along with a bug with the game's achievements that caused the "collect 5 coins in a room" achievement not to work properly.

This version was released on January 6 2015 and is labelled 1.0.9. This updates fixes minor bugs.

This version, labelled 1.2 on Android and 1.1.1 on iOS, adds a special upgrade to each character that can be purchased with coins. Along with this, the Android version also fixes a crash bug.

The Amazon App Store version is labelled 1.1.1 and contains the contents of the upgrades version and all previous versions.

Labelled as version 1.2.1 and released on March 23 2015, this update fixes bugs, along with fixing an event that crashed the game.

This update was released on May 13th 2015 for iOS and Android, labelled as Version 1.2.2 on iOS and 1.3.0 on Android. This update is the second major content update to Platform Panic, adding the hazards spikewheels, crushers, lasers, the pipe interactive object, drill tanks, new rooms and background art, and new achievements.

This update also adds a function to the game that records which rooms the player has completed. Along with this, the first time the player dies they can continue either by buying one with coins or watching a video advertisement. Some old rooms that were present before the update were changed to make them harder.

Released on May 13 2015 for both iOS and Android and labelled 1.2.2 on iOS and 1.3.0 on Android, this version makes a change in the game, although this is not specified in the update's description as it is a copy of Update 2's description.

Each character having a special ability was a feature Nitrome wanted to implement into the game's initial release, though they were unable to due to time constraints. Despite this they did say this feature may be added in a future update if the game is popular,[3] an update that later came about on January 28, 2015.

The subsequent release of Platform Panic on the Amazon App Store was used to test the viability of porting further free games with advertisements to the said store.[4] Nitrome began working on the game's second update, development having been started by March 13 2015[5].

Platform Panic's retro theme influenced much of the art and characters of the game.

The testing facility background has a series of clouds, ! boxes and hills (complete with eyes) painted onto it. All of these set pieces are common scenery in the Super Mario Bros series.

One of the jungle backgrounds has two colored squares, sunflowers and palm tree with lantern. These set pieces are common scenery in Green Hill zone from Sonic the Hedgehog.

One of the jungle backgrounds has a Metroid from the Metroid series.

One of the jungle backgrounds has a pipe with a Piranha Plant from the Super Mario Bros. series.

One of the jungle backgrounds has a handheld console which looks like a Game Gear.

The background with a handheld resembling a Game Gear

The Piranha Plant cameo
Add a photo to this gallery

Pipes are a reference to Warp Pipes from the Super Mario Bros. series.

Infinite Void Room (Out of Bounds)

There is a way to glitch out of bounds using vertical pipes. The player has to use either Spacegirl? with the Double Jump ability or Radd Bradd with Wall jump ability unlocked, and find a room in which pipes on the floor connect to pipes on the ceiling directly above, but without any Spikewheels in them. If the player uses the double' or wall jump when entering the bottom pipe (Radd Bradd must be on the pipe next to wall), right as they about to get teleported at the top, they will glitch out of the room. The game won't load any other rooms, as the player isn't intended to leave a room that way. Spacegirl? will end up in an empty void, constantly falling. Every time the player reaches a side of the room, they will be teleported on the other side, like if they went from one room to another, and their score will increase by one. Since the void room contains no hazard or enemies, it is possible to reach a virtually infinite score using that glitch. To end the glitch (and register their score), the player has to try to leave the room from the left or the right side. Another room will then be loaded for a few frames. Spacegirl? can then interact with anything they collide with in this room, including hazards. Hitting a hazard or enemy this way is the only way to end the glitch without closing the game. The setup required to perform this glitch is very specific, as the pipe the player needs to use has to be on either ends of the room vertically, and has to be free of any hazard. If there is a Spikewheel in the pipe, the Spacegirl? will die when performing the glitch. If the pipe isn't directly vertical, or if both ends of it aren't on the top/bottom of the room, the game will load another room but the player won't be in it, resulting in a soft lock.

The player exiting the glitch

The glitch on mobile
Add a photo to this gallery

Prior to porting, Nitrome showed interest in porting Platform Panic to the Amazon App Store and also are interested in porting the game to Windows Phone.[12]

On March 20 2015 Platform Panic was selected by Apple for their Indie Game Showcase. [14]

The preview image for the second update showing a room that is not used in the game. Notice how it can only be completed with Plumber.
Add a photo to this gallery

Retrieved from "https://nitrome.fandom.com/wiki/Platform_Panic?oldid=208288"
Community content is available under CC-BY-SA unless otherwise noted.