Plod is a cancelled Nitrome game that would have been free[3] and released for iOS on the Apple App Store[1], for Android on the Google Play store[1] and Amazon App Store[1], and on browser[1].

During development, the premise of the game's story was that these feet had been imprisoned somewhere and villagers had traveled up into the sky after hearing about large gold coins[3]. The feet would then escape from their place of captivity and set out to exact revenge on the villagers and reclaim the gold that they have taken as a result of their activity[3]. 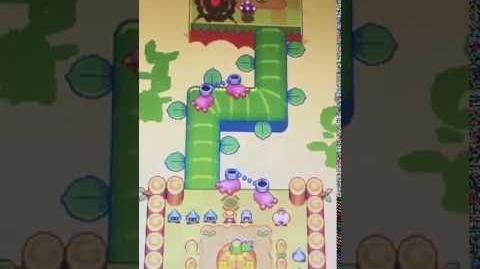 Plod (cancelled Nitrome game) - Animations
A video showing some animations from the game. Originally posted on Twitter by Jon Annal on January 6th, 2017.
Add a photo to this gallery

Plod was first announced on July 17th, 2015[3] and by July 24th, 2015, the game had entered mid-development[5]. The game was cancelled by September 1st, 2015[6], the reasons for this being that Nitrome was unable to make very much content that was challenging and fun to complete[7].

Despite the game's cancellation, much of Plod's engine was reused for Rust Bucket, a game whose development started right after Plod's cancellation and which also had the same perspective and depth problems as Plod[7].

On January 5th, 2016, Jon Annal posted on his Twitter account two new images from the game[8], and the following day posted an short video showing some animated sprites[9].

Although "Plod" is the game's name, during development this name was only meant to be the game's working title as Nitrome had not decided on an actual name yet[3].

Retrieved from "https://nitrome.fandom.com/wiki/Plod?oldid=199076"
Community content is available under CC-BY-SA unless otherwise noted.