Tower Fortress is a rogue-like platforming game developed by Keybol and published by Nitrome. The game was released on the App Store on November 15, 2017, with the Android released the day after. A Steam release was also made available on November 20 of the same year. The player controls Sara, who is trying to ascend a tower.

The player can move, jump and shoot using the buttons at the bottom of the screen.

The player character Sara can walk on platforms and can perform the following actions: double jump, wall slide, wall jump, and a spin attack that can damage enemies[1]. The tower consists of four environments encountered sequentially[1], each which consists of randomly selected level sections, along with the different mechanics of each environment[1]. Upon reaching the end of each environment, the player can receive a positive enhancement from one of three upgrade capsules[2], but only if they have killed a number of enemies to get keys[1].

The game has four environments: Gatehouse, Library, Vault, and Chamber[1]. Each environment has its own game mechanics and enemies.

The player can purchase and choose between 40 suits with varying abilities.

This update was released on December 5th 2017 on all platforms.

This update was released on December 22th 2017 on all platforms.

This update was released on February 14th 2018 on all platforms.

Stuck in a wall glitch

After the fight with Wizard Lord, golden walls will appear on either sides of the screen to allow the player to reach the end of the level. If the boss is killed right as the player is standing where the walls should spawn, they will get permanently stuck inside of them. This situation can only be escaped by returning to the menu. 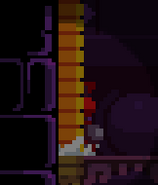 The player stuck in the wall

Retrieved from "https://nitrome.fandom.com/wiki/Published:Tower_Fortress?oldid=200623"
Community content is available under CC-BY-SA unless otherwise noted.