Ultimate Briefcase, or Super Briefcase II, is a 2D survival platformer made by Quite Fresh Games and published by Nitrome. The game was released for Android and iOS devices on February 4, 2016, and revolves around a series of characters dodging bombs dropped by machines from the sky.

84 days ago, before the incident, Glissant was at the squid city zoo, placing an order for food from ScumCorp. He ordered 1,000 sardines, 300 sushi rolls and 2,000 doomsday machines. The order was successfully sent to ScumCorp.

83 days ago, before the incident, Radley was at ScumCorp HQ. He had recieved Glissant's order of the 2,000 doomsday devices. A profit of one quadrillion came because of selling the machines. This exicted Radley, a little too much.

23 hours ago, before the incident, Radley got the briefcase which was the control unit for the doomsday devices. However, a delinquint stole the briefcase, and Sally was stuck chasing him for the briefcase.

12 minutes ago, before the incident, Jeff-Jeff saw Tucker come by, and he sold the briefcase to him for $4. Radley came by and bought the skateboard for $10.

12 seconds earlier, before the incident, Tucker was in the alley, with the briefcase. The second he dropped his briefcase, he accidentally triggered the doomsday devices.

Ultimate Briefcase is played in a set arena where players must avoid a constant onslaught of bombs and lasers. Certain bombs leave pickups on the ground upon exploding, which can be collected to activate the character's special ability or add certain upgrades permanently within the game. Players are scored by how long they survive without coming into contact with a hazard, based on an in-game counter. A playthrough ends when the character's last heart is depleted.

A shop is accessible in between games and on the menu screen via the cart icon. Players can purchase characters or items with in-game coins. These coins are also available as an in-app purchase in its own section within the shop. When players have enough coins to purchase a character, character upgrade or an item, bouncing "New!" text will float above the shop section icon.

Players can buy both characters and upgrades from the "Characters" section. Each character has their own special ability that can be upgraded to a level of 3 so that their ability has a larger scale effect.

Many of the characters have important things to remember- 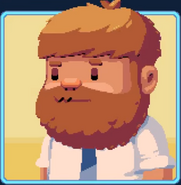 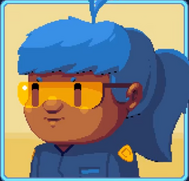 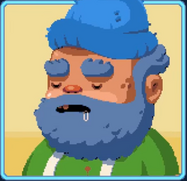 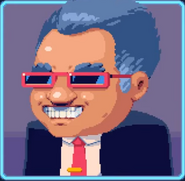 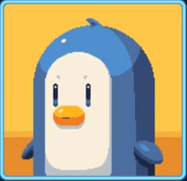 The "Items" section of the shop has two subsections: Hearts and Powerups. Hearts permanently add an additional heart container, allowing players to take extra hits when they make contact with a bomb. Powerups permanently add powerup airdrops that fall periodically within the game and grant specific temporary abilities. They will also increase the frequency of powerups that get dropped by a certain amount.

When the player travels to another arena, that arena becomes unlockable as a shortcut in the shop once the player dies. Shortcuts can be purchased so that the player starts in that specific arena rather than the default one. In order to travel to a new area, you must collect all of the falling letters in the word RPG, which fall from the sky. Once they have been collected, a bazooka will fall from the sky, which you can use to destroy the wall on the right and go to the next arena.

Some of the areas here have special entities-