Rainbogeddon is an action game released on February 2, 2012. In the game, the player controls a grey creature, with the goal of collect all pills while dodging enemies. The grey creature is always moving, with no way to stop it except running into walls. This game has the same basic concept and idea of Pac-Man. The player only has one life, and can collect power ups that appear randomly throughout the levels. This game was made a distributable game on March 13th, 2013.

When a player touches an enemy, it will die unless they have a power up; it counts as a second life. In this case, they will lose their power up and become invincible for a few seconds. Each level has a certain amount of pills needed to complete the level, but if the player dies, they will have to start the level over.

Controls can be defined. Below are the actions required for each assigned key.

Rainbogeddon has forty levels. In each level, the grey creatures have to collect all pills before proceeding to the next level. Enemies, which respawn once killed, will try to hinder the grey creatures. Power ups can be obtained and used for destroying enemies. Collecting several of one power up will strengthen it, increasing a certain part of it (e.g: A strengthened drill will drill faster than a basic drill).

This is the first level to feature fish and the bubble weapon.

The bubble weapon is introduced here because the Fish can easily kill the player.

This level introduces elite spheres, the heart weapon and locked doors, these door opening when the player has collected enough pills.

This level marks the first appearance of the Drill.

Player encounters teleporters and snakes on this stage.

This level introduces the temper monsters.

This level introduces the three-eyed spheres.

This level's design is identical to level one from Pac-Man, the only difference being that this stage in Rainbogeddon has players placed at the Pac-Man's starting position. The spike-haired blobs are also introduced on this level.

The blocks in this level spell out the word "Nitrome.com".

The introduction of black cats on this level makes the level difficult.

This level introduces and is the only level to have fuzzy spheres.

Similar to level 17, the presence of black cats make this level difficult.

Level twenty-two introduces the waste monster, the only enemy that places hazards on the stage. The player starts with a bomb powerup. 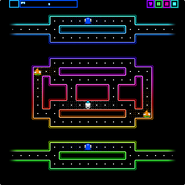 Level 22
Add a photo to this gallery

This level introduces the mother jellies, which spawn baby jellies.

The only enemies in this level are spike haired blobs, which often have a sad expression.

This level is shaped like Cuboy. Red bombs are introduced here.

Power Ups are objects spawned into level in Rainbogeddon. They are spawned into help the player, and can be used to kill enemies or for other uses. They can be strengthened by picking up several of the same power up. 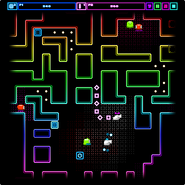 The previewed image
Add a photo to this gallery

Below are sound files for Rainbogeddon.

As seen in the September 23 2011 preview picture, pills were meant to be larger, while in the final their size was decreased.

If the player opens too much countdown squares, a sound is heard which gets louder and louder.

When making the game Nitrome aimed at expanding on the gameplay components of the "maze munching genre" brought on by Pac Man[3]. When asked about what was used for the voice of the announcer, Nitrome replied that it is "probably" the text-to-speech program that comes with every Macintosh computer[4].

Retrieved from "https://nitrome.fandom.com/wiki/Rainbogeddon?oldid=203960"
Community content is available under CC-BY-SA unless otherwise noted.