Test Subject Complete: One blow
Nitrome Must Die: Varies depending on gun

Rex209 is a character that makes a cameo appearance in Nitrome Must Die, and appears mostly throughout Test Subject Complete.

Rex209 is a suit created by the Professor as a prototype, but was stolen by Doctor Nastidious - the forerunner of the vast mech suits the doctor would later create for attempted world domination in Test Subject Complete.

Rex209 plays a major role in Test Subject Complete's story, guiding Blue in decisions to make along with doing much of the investigating in Dr. Nastidious's base. Along with this, it is the first Nitrome character to speak in English outside of text.

The Rex209 seems to use parts from the proto-suit, as they have several similarities. The Rex209 consists of two legs that each have four back toes. On the side of this is a proton gun that shoots blue bullets. On the top is a glass cockpit, along with a metal piece on the right side of the suit. The cockpit, along with the glass shell, seems to be smaller than Blue's previous suit. The entire chassis of Rex209 is mainly grey coloured, except for a green light on the right metal piece and the blue ammunition in its proton gun.

The suit was made by the Professor, but was later stolen by Doctor Nastidious. It is known to have been in development for a long time, as Doctor Nastidous is excited about testing it on Blue once he completes test thirty of Test Subject Green.

In Test Subject Complete, Rex209 replaces the proto-suit for Blue. Rex209 guides Blue through the tests that the doctor set out for it. Before every experiment, Rex209 would communicate with Blue via a screen on the inside of the Rex209 mech suit. Eventually, Rex209 helps Blue escape the test chamber of Doctor Nastidious.

The Rex209 is mentioned in the descriptions of level twenty-eight, twenty-nine, and thirty of Test Subject Green.

Rex209 appears as the replacement proto-suit for Blue in levels one to twenty-five of Test Subject Complete. Rex209 has several more features than the proto-suit when it comes to motion and shooting. These features are the key to completing the tests Doctor Nastidious made, and, eventually, for escaping Doctor Nastidious' base.

Motion
Rex209 can perform all of the normal motions of the proto-suit, except for one added feature: it can walk on the bottom of platforms. It can do this by jumping into the bottom of a platform, then flipping upside-down so that it can walk normally.

Along with this, Rex209 has a special feature that allows it to be moved backwards when shooting and not moving at all. Other than this, it seems as though the Rex209 can jump and walk at the same pace as the proto-suit.

Armament
Rex209 fires slim blue bullets. These bullets move faster than the bullets of the proto-suit, and also can be fired faster in succession. These bullets do not seem to be any stronger than Blue's regular bullets from its proto-suit, however, it should be noted that all the enemies Blue kills with its Rex209 bullets, except for the rhino orange enzyme, are all enemies that take a single bullet to kill.

Respawning
Rex209 serves as a respawn point for Blue. When Blue dies, Rex209 will break apart into many pieces. These pieces will then reassemble at the last spawn area, or, if none exist, at the beginning of the level.

Level selection
The player will enter a first person perspective in Rex209 prior to starting most levels (levels one to twenty-five). In the first person mode, Rex209 will tell the player information about the level he/she is about to enter or the story of Test Subject Complete.

The Rex209 appears in Test Subject Arena 2, used by two characters: the Professor and Blue.

The Rex209 makes an appearance in Nitrome Must Die, appearing in the second half of the fourth boss battle. When Blue's health reaches half, it will be pulled off screen, and brought back on in the Rex209. It will fire rapidly, causing the player to have to get in its line of fire if they wish to damage him. The only time the player can damage him without being shot at is when it is being switched out. This is its only attack.

At the start of levels one to twenty-five in Test Subject Complete, Rex209 will communicate with the player via a screen on the inside of its glass cockpit.

Blue in the Rex209 in the game Nitrome Must Die

The concept art of the proto-suit. Notice how the one on the middle-right bears a resemblance to the Rex209. 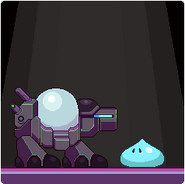 Rex209 and Blue in a teaser image for Test Subject Complete

Rex209 in the menu of Test Subject Complete 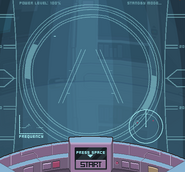 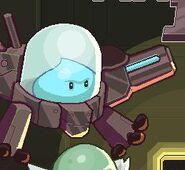 The Professor in the Rex209

A Rex209 mech suit while charging

The Professor shooting when crouching.

The Professor being shot while crouching.
Add a photo to this gallery

Retrieved from "https://nitrome.fandom.com/wiki/Rex209?oldid=209041"
Community content is available under CC-BY-SA unless otherwise noted.