One blow from an arrow (Twin Shot series)

Rider dark creatures are enemies in the Twin Shot series as well in Nitrome Must Die.

Rider dark creatures will ride back and forth on the platform they are placed on. They also hold a sword. If the rider dark creature turns toward the player and sees them, it will begin charging at them at a high speed. If the player is too far away, the pig returns to normal speed. It can be shot with an arrow even when they charge. When a dark creature is on a pig, they appear smaller and skinnier than usual. Rider dark creatures are one of the least recurring enemies in the Twin Shot series.

Although the dark creature that rides the purple pig does not appear in Nitrome Must Die, the pig itself is rode, only in one level. On that level, four executives are spawned out of pipes, riding the pigs. The room where they appear in is rectangularly shaped.

The pigs will run to one side of the room and to the other side. The player will be hurt if they collide with them, but not hurt that much. The executives will crack their whip at the player as they come close, this being their only attack until they are brought off the beast.

The player can only damage the executives if they shoot them from behind the beast while jumping, as shooting while standing on the bottom floor will only harm the pig. Once the pig is killed, the executive will fall to the ground and begin fighting there. 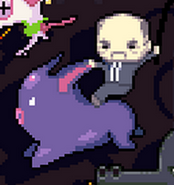 Retrieved from "https://nitrome.fandom.com/wiki/Rider_dark_creatures?oldid=205729"
Community content is available under CC-BY-SA unless otherwise noted.