Click mouse - Select tools at the bottom of the screen and use them.

The player receives an infinite amount of nitro for the level. The player should place nitros on the building to blow it up, until the target budget is reached. 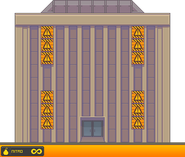 Level 1
Add a photo to this gallery

The player receives five drills for the level.

With the drill, the player must aim it vertically from the top of the building in order for the drill to face downwards; it is possible to aim the drill in between the blocks to hit two columns at the same time.

Level 2
Add a photo to this gallery

The player has a cannon with infinite cannon balls.

Using the cannon, the player has to aim at the building's spots with the explosives uncovered or hit any of the ones covered in glass. The player must also avoid hitting the Boss' van. 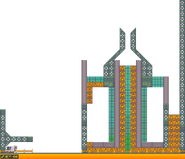 Level 3
Add a photo to this gallery

The player has to use the wrecking ball to destroy the building before the helicopter runs out of fuel. It is ideal to go for the explosives first. 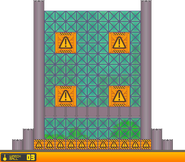 The level 4
Add a photo to this gallery 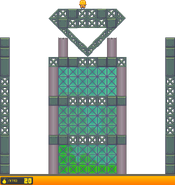 Level 5
Add a photo to this gallery

Similar to level three, but the player has to guide the missiles towards the vulnerable spots of the building. Ivan (Larry's cousin) is first mentioned here.

Level 6
Add a photo to this gallery

The player is equipped with infinite nitro and four missiles.

This is the first level with destructible civilian buildings. If they are destroyed, the level will have to be restarted.

This is the first level with the safes and the helicopter equipped with a grabber.

Grab the blocks in front of the safes using the grabber. Avoid destroying the civilian buildings.

The player has to carefully use the given tools in order to complete the level.

The player must hit the top or the side of the structure, while being careful not to hit any civilian buildings.

The player has to get all three Larrys safely to the ground without destroying the civilian buildings.

The player has to drill from the bottom left and work their way up.

Carefully shoot each missile into the nitro and get the safe to the ground.

Carefully destroy each block (not the explosives) then blow up the building.

Quickly nuke the top two explosives, wait, and then do the same things again and again to get the Larrys down.

Shoot the cannon balls into the "slots". Make sure they don't crash into the civilian buildings.

Thump once in every few second intervals.

Shoot the missiles into the clumps of block. Then use the thumper.

Shoot the missiles so they will crash into the super steel.

Destroy the left leg. Then destroy the top of the right.

Two additional levels were added as part of the Rubble Trouble update. [3]

In this level, the player has infinite grabbers and one air strike. Two big blocks are placed on the far left of the level, the top block going a bit off the top edge of the bottom block. The bottom block is sealed off and can only be destroyed by a large explosion that will be able to breach the metal and detonate the explosives in the bottom block.

The top block has the right side of the block exposed, exposed so that touching the explosives with the grabber arm will detonate them. The player also has four blocks, all which have explosives on them. The player has to place 3 them on top of the bottom top block in a way so that each explosive on the four blocks is at least one block away, so when the player uses the air strike it detonates one of the blocks which detonates the other block and starts a chain reaction which detonates on explosives on the level.

Building: One ON-40 Tower

Building: One Statue of Liberty

The amount of money earned depends on the number of safes brought safely to the ground as well as the area and space of building demolished.

Rubble Trouble New York is notable for having an unusual amount of unused and beta content, some of this content still present in the game's files.

Content in this section remains in the code of Rubble Trouble New York (with the exception of beta content), but is not used.

Although the drill machine is unused, coding for it exists in the game, under the name of DrillTruckMC . This code is exactly the same for DrillMC (the Action Script for the drill tool), with the exception that every occurrence of DrillMC is instead DrillTruckMC . The code is below:

Animated drill machine
Add a photo to this gallery

The portapod is an unused structure, unknown if it was meant to be destroyable or just non-interactive scenery. In Rubble Trouble, the portapod has no debris for being destroyed.

Despite being unused it has appeared in other content relating to Rubble Trouble. Prior to Rubble Trouble's release it could be found in the Snowman skin with other Rubble Trouble characters, likely indicating it was cut from the game late in development. After the game's release, a portapod along with a drill machine appeared on the front page of Nitrome.com in the short video (right click → Play) that goes through all the recently released games. The portapod again appeared appeared in the Oodletrouble skin.

If it could be destroyed, the portapod may have cost the player $100 for destroying it, as this is the lowest amount of money that can be lost for destroying a structure.

The portapod from Rubble Trouble

A portapod in the Snowman skin

The transport truck was likely replaced with the boss' van, as both objects are almost exactly the same.

Transporter truck not carrying anything

Big vase
Add a photo to this gallery

An image found on Simon Hunter's old website depicts the air strike plane with yellow on the top instead of grey.

Beta plane image
Add a photo to this gallery

Retrieved from "https://nitrome.fandom.com/wiki/Rubble_Trouble_New_York?oldid=203973"
Community content is available under CC-BY-SA unless otherwise noted.