Carefully Demolish buildings with new tools in this Rubble Trouble Follow up!

Includes a secret level.
Rubble Trouble Tokyo, also known as Rubble Trouble 2, is a puzzle-action game released Thursday July 28, 2011. As a sequel to Rubble Trouble New York, it retains the same basic gameplay as its predecessor, only it takes place in Tokyo, Japan instead of New York, United States. This game was made a distributable game on May 16th, 2012.

As in the previous game, the objective in each level is to earn a set amount of money by demolishing building using the various tools supplied. Destroying civilian buildings and vehicles will subtract money from the player's score.

The player can simply place the nitro on the explosive blocks to destroy the building.

The player has infinite Mecha saur use and must destroy three giant buildings. Simply shoot laser beams at the builds and/or just stomp through them.

The trick to this level is blowing up the blocks while on the outside while using the grabber to get the super steel.

The player must use multi nitro to get the Larry brothers down from the building.

The player has to simply find three barriers to get the air strike to blow up two buildings.

This level introduces sumo wrestlers. The player has to use them as an advantage to wreck the site.

The player has to send one drill through the middle pipe.

This level introduces the pachinko. The player has to destroy a giant building and with one pachinko. Dropped correctly the player will receive nine extra pachinkos.

This level introduces the Girder, a connective barrier. The player has to use it and ten missiles to make a sumo wrestler drop down and destroy the building.

The player needs to use the chain gun to shoot down the box of tools then use the missile lanucher to shoot the box of tools again. Then, use the pachinkos to break down the support and then hit the explosives in order to destroy the building.

There are six buildings the player has got to destroy on the level, using eight Pachinkos, without destroying a karaoke club on the level.

The trick to this level is to use the girders to attach the sumo wrestlers to some pieces of metal and then use the chain guns to break the supports beneath them, causing them to swing into the building, destroying it in a similar fashion to the wrecking balls.

In this level, the crew clones Larry so that there are twenty-five of them. The player can only harm up to two of them. It tests the player's skill at using the grabber.

In this level, the player must use girders to connect certain areas of the building, then use a chain gun to start a chain reaction.

The player must use the grabber to place a bunch of pipes properly. After that the player should use the drill to destroy the building, using the pipes to guide it.

The trick to this level is using the girder to create crosses at the super steel so that when the player blows it up the building with a multi nitro it won't fly out and destroy the civilian buildings, but instead stick together.

In this level, the player must use 2 girders and 1 multi-nitro to get the building into areas where airstrike can be used limitless times.

The player must use the girders to keep a massive metal frame in the air so that the chain gun can be used.

The player has six missiles. First, they have got to destroy the building using them and the explosive blocks, then use a rocket to destroy a block so a grabbers box will fall to the ground. Then once it does, use the grabber to grab the stair shaped steel. Pick it up and cover the "Hai! Bonzai" hut with it. Use the missiles once again to destroy the blocks keeping the sumo wrestlers from dropping down.

On this level the player has eight pachinkos. Try to get it to slide down a diamond held up by two girders to slide down into a V-shaped gap. It will possibly get stuck but if the player is lucky enough, it will go onto onto the edge of the V and leap over to the other side. Keep detonating it to get the perfect chance, then detonate the ball to destroy the whole building with explosive blocks.

The player must use the metal pieces to create a bomb shelter for the two Viper Fist dojos.

The player must use girders to keep metal from blocking the path of drills and from falling on the buildings below.

Buildings: One Size Of □ Building

In this level, the player has five pachinkos and a drill. The player has to swing the pachinko and let the ball go at the right time near one of the sloped pieces of metal so that it goes down the slope and close enough to the glass so it can explode and take out the glass. The player has to break the bottom glass, then the top. Do this four times, and when all the glass is shattered the player can fire the drill which will go through the pipes periodically and destroy the building. Upon destroying it the player completes the level and can watch the ending.

On the building is an Off The Rails level. If the player completes the level, a screen will appear saying they've unlocked a secret level. The player can then proceed and destroy the building. 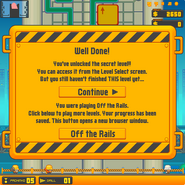 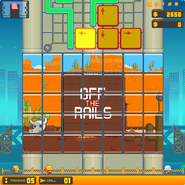 The mini game when finished
Add a photo to this gallery

In this level the player plays a version of Breakout, called Danger Blocks. The player gets three tries to use a bat (called minigame) and bat a ball and try to destroy forty-two blocks arranged in a six by seven grid. Each block in the Danger Blocks game represents a brick block above the game, some of the blocks being explosive blocks. Destroying the building will complete the level, and the player will view a special end screen saying that they've completed all the levels.

While reusing a few of the tools from the first Rubble Trouble, Rubble Trouble Tokyo introduces some additional tools as well. The new tools include:

A month and a day later, Nitrome revealed that game hinted in the pixelated image was Rubble Trouble Tokyo. An image of the game was provided.

Nitrome revealed a trailer for Rubble Trouble Tokyo. The trailer revealed some of the new tools, and some new objects.

Retrieved from "https://nitrome.fandom.com/wiki/Rubble_Trouble_Tokyo?oldid=205094"
Community content is available under CC-BY-SA unless otherwise noted.