Sandworms are enemies in the game Bad Ice-Cream 3.

Sandworms are pink worm creatures with six orange feet and four fangs. Their eyes and lips are orange, and their mouth is circular and has four fangs arranged with one on each side of the mouth. Their underbelly is purple while the rest of their body is a pale pink colour, most likely due to spending lots of time underground. Their eyes resemble their feet.

Incomplete section. You can help by adding missing info.
Sandworms are enemies that can dig underground that first appear on level four. They can burrow under regular snowy ground and under ice blocks, but cannot burrow underneath metal ground. When they are underground, the part of the ground they are moving through can be singled out by a large hump in the ground. When they burrow under ice blocks, the ice block they are under will be raised slightly. They are extremely slow when above ground. They cannot go back underground if they are standing on metal. If they resurface when under an ice block, the ice block will break.

A sandworm facing the player

The sandworm eating the player 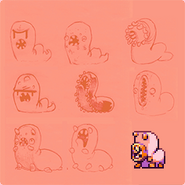 The sandworm's final sprite (bottom right) among much concept art for the enemy
Community content is available under CC-BY-SA unless otherwise noted.
Advertisement