Settings are a menu component that allows the player to adjust certain technical aspects of the game they are playing. Settings appear as a small gear coloured accordingly to the game's theme, this gear placed at the top right side of the screen. First introduced with Super Snot Put, settings serve as the successor to the pause, music, and sound effects option buttons.

Settings are the successor to the options buttons. In each game, clicking the settings gear will cause a small box to open up and everywhere outside the box to be darkened. This box contains buttons that can be clicked. Although some games may have additional buttons, across all games that use settings, it will always contain a music button, sound effects button, and resume button.

Some games may add other buttons based on the different functions that game has. With its introduction in Super Snot Put, Nitrome has moved to including the settings gear in all games instead of the option buttons. Although they have decided to do this, games released prior to Super Snot Put will not have their option buttons replaced with settings. The settings gear is present at all times of the game, and can be clicked at any time.

Incomplete section. You can help by adding missing info. Needed: More information.
The settings found in Nitrome Touchy are different from the normal settings. In this application, to open the settings the player has to slide to the left. The only option is "Disconnect".

Incomplete section. You can help by adding missing info.
Button are contained inside the box that pops up when the settings gear is clicked. Buttons have a name and an image to accompany this name.

Represented by a ♫, the Music setting allows the player to toggle the game music on or off. When off, a horizontal line appears over the ♫.

Appearing as a square yellow block with an isosceles triangle on it pointing to the right. Clicking this button closes the settings gear box, although the same function can also be done by clicking outside the settings gear menu.

Seen as a blue arrow rotating almost in a circle, this button will cause the player to restart the current level they are on. This button can be activated without clicking it or opening the menu by pressing 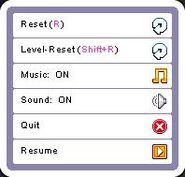 The Oodlegobs menu, with the button "Reset"
Add a photo to this gallery

Depicted as a red circle with a white X on it, this button will take the player back to either the game's menu or level select screen when clicked.

This button appears as a regular keyboard key with two small eyes and a smile. Clicking it causes the player to be taken to a screen where they can reassign their keys to other buttons. 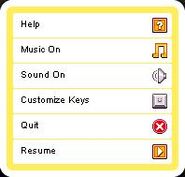 Appearing as a yellow square with a question mark in it, clicking this button brings the player to the game's help menu option.

Depicted as a trashcan, this button when clicked turns the screen black and asks the player if they would like to delete their save, saying that all their progress will be lost when this is done. One button, appearing as a square with an arrow pointing into it, will take the player back to the menu, while a trashcan button will delete the player's save.

This button appears in Ditto and Submolok. 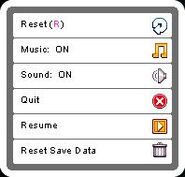 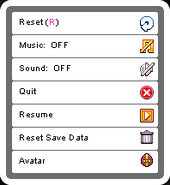 Commentary appears in Bump Battle Royale, depicted as a speech bubble. Clicking this button turns off the talking of the announcer during levels. 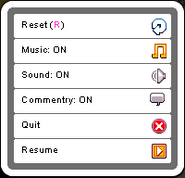 In some games, such as Oodlegobs, pausing the game may sometimes cause the game to resume normally and be playable, only with the settings menu present and the screen darkened. Closing the pause box causes the game to freeze, the effect that should have happened when the games was paused. Getting out of this glitch requires the player to quit the level.

In the Dog House (mobile)
Add a photo to this gallery

Retrieved from "https://nitrome.fandom.com/wiki/Settings?oldid=201538"
Community content is available under CC-BY-SA unless otherwise noted.