Shovel Knight Dig is a platforming game developed by Nitrome and slated for release in 2021[1]. The player plays as Shovel Knight trying to get his loot back that has been stolen by Drill Knight[2]. The game will be released on Nintendo Switch[3] and Playstation 4[4].

In Shovel Knight Dig, the player traverses downwards through a cavern set across different environments that are divided up into levels[6][7]. Each level is made up of randomly selected pre-made level segments that are stitched together to create the level[6]. As the player advances through the cavern, they can encounter shops that sell positive enhancement items[7]. At the end of each level, the player is presented with the option of continuing on to the next level or playing a previously completed level[8].

If the player dies, they will lose all collected gems and power-ups and be taken back to outside the top of the cavern and have to restart their traversal through the cavern[9][10]. Upon re-entering, the player can regain half[8] their lost gems by touching flying bags scattered throughout the cavern[9].

All themes have dirt that Shovel Knight can dig through and are situated underground. 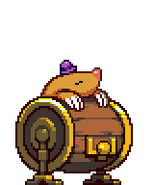 The following shops can be accessed in rooms located at the side of each level and are usually denoted by a blue lamp, as seen in the PAX demos.

The exterior of the horse's shop

The interior of the horse's shop 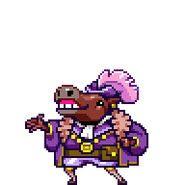 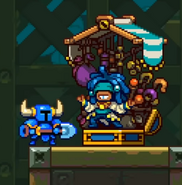 These can be purchased from Chester.

These can be purchased from Gastronomole[7].

The following food items restore the player's health. Prices are indicated in parenthesis and are denominated in gems.

Upgrades positively effect the player and can be purchased from Chester, randomly obtained from the utility drill if the "?" option is selected[7], and given by non-playable characters[17].

These items and upgrades are not lost on death[6][22]. 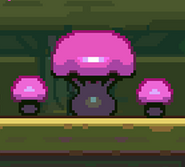 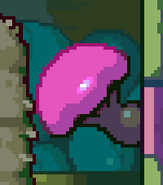 The War Horn being used 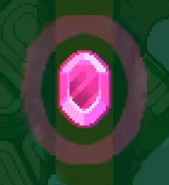 A jewel in the background of the Spore Knight battle 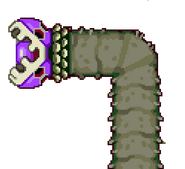 A boneclang statue before being attacked

An armoured beetle with its shell exposed 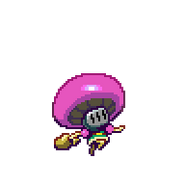 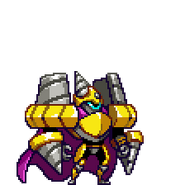 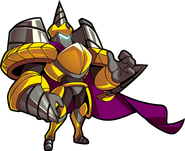 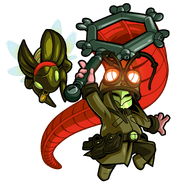 Sprites of Hive Knight and Fleck 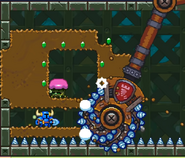 A medium sized drill on a belt and released

Footage of the demo was captured by the following websites:

Shovel Knight will drop into a room that can have the following configurations (all may not be listed) which always has a rock shaped like horns holding a pink jewel in the background[7]:

He will then converse with Spore Knight about her intentions before the battle begins[7]. There are two possible sets of dialogue, and they are listed here. The music during the battle also changes to a boss battle theme[7].

Spore Knight has ten health and her body can be damaged with shovel slashes, but her head cannot be damaged by Shovel Drops[7]. She starts off the battle jumping around, and upon being damaged or upon not being damaged for a short period of time, she will dig into the ground then jump up somewhere else and execute one of the following attacks[7]. She generally jumps up at the edges or middle of the main area with this digging attack and tries to do this away from the player[7]. She has the following attacks:

At some point during the battle, white spores will start falling[19]. They fall in waves and can be destroyed by shovel slashes[19]. Upon being defeated, the floor will explode and both knights will fall on to a path selection platform where Spore Knight will bounce around and fall down the left path to the next area (the right path is also possible[19]) and Shovel Knight will obtain the pink jewel shown in the background[7].

After this, the screen will turn black and read "SPORE KNIGHT DEFEATED! WELL DONE" and prompt the player to enter three letters to represent their name, which will be submitted to a leaderboard showing the players with the 10 highest gem scores[18].

Development of Shovel Knight Dig started when Yacht Club Games contacted Nitrome about making a small arcade-like Shovel Knight game built around digging downwards[17][8]. Development of the game was primarily handled by Nitrome[17]. The game was announced on August 28th, 2019, during a video presentation given by Yacht Club Games[35]. The game had been worked on for more than a year at this point and was in early development[36]. At this stage, the story had not been completed[9]. Yacht Club announced during its Yacht Club Games Presents presentation on February 26th, 2020, that the game would be released in 2021[24]. By February 27th, 2020, Nitrome had finalized a list of themes and bosses that were going to appear in the game[17].